Be Real or Remarkable (Not Both) 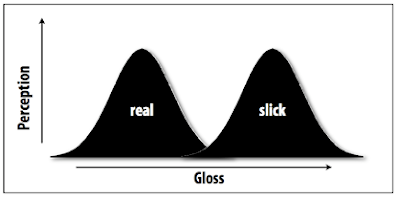 Seth Godin recently shared about the problems which companies face when they try to be both authentic and slick at the same time. He created a nice looking chart (see above) and warned us about being caught in the dead zone which is between the twin peaks above.

“…really well done HTML email works, as does unique, hand-typed text email. It’s the banal stuff in the middle that people don’t read. And yet, 95% of what I see is precisely in the dead spot of the middle zone.

The Blair Witch Project and Pi both felt authentic. The Matrix was perfectly slick. The new Star Wars cartoon is just dumb.”

Interestingly, this point had some parallels with an earlier observation I made about authenticity in advertising as seen from the flyer below. 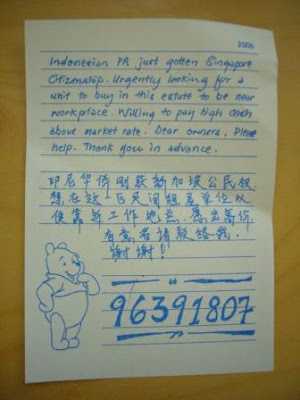 While the above flyer appeared to be amateurishly done, it did attract my attention a whole lot more than the yawn-inducing ads that real estate agents typically generate.

Similarly, I have noticed that Talent-time/Singapore Idol/The Dance Floor/other amateur talent contest winners rarely make an impact beyond their second or third years in business (with the rare exceptions). There is a distinct difference between doing well on an amateur, root-for-the-underdogs platform versus the cold, hard realities of trying to sing professionally for a living. You may sound cute and charming mimicking Britney Spears, but end up being hopeless with your own compositions.

In marketing and advertising, you need to decide where you wish to belong. Be either truly authentic, raw and gritty or go for the ultimate lush and classy category. Find a way to differentiate yourself from your competitors and do not try to be too many things to too many people (at least in one campaign or product launch).

At a certain point of time, one has to make a decision on where one’s standing is. And to accept which way is best.

Founder of Cooler Insights, I am a geek marketer with almost 24 years of senior management experience in marketing, public relations and strategic planning. Since becoming an entrepreneur 5 years ago, my team and I have helped 58 companies and over 2,200 trainees in digital marketing, focusing on content, social media and brand storytelling.
I Got a Free Bus Ride!!
Saying Sorry is Good for Business