The Madness Behind Hollywood’s Greatest Movie 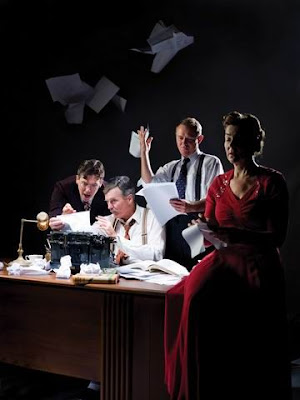 Set in 1939, Ron Hutchinson’s Moonlight and Magnolias is a comedic take on what could possibly be the true behind-the-scenes story of the making of Gone With the Wind. The premise goes like this: David O. Selznick has only five days to salvage the production of Margaret Mitchell’s bestselling novel while losing up to $50,000 a day. He enlists script guru Ben Hecht and fast rising director Victor Fleming to accomplish the task, locking them and himself in his office with only peanuts and bananas for sustenance.

Premiering at the Playhouse of the Art Centre, Melbourne Theatre Company’s production is helmed by veteran film director Bruce Beresford of academy award winning Driving Miss Daisy and Black Robe fame. Heavy on laugh-a-minute slapstick with a dash of social satire, Beresford’s tightly directed comedy benefits from the close chemistry and polished performance of the leads.

Opening on an energetic note, the production delivers memorable wisecracks and sharp repartees sprinkled with occasional physical humour. One could sense Selznick’s increasing desperation as reluctant conspirators Hecht and Fleming start bawling like kindergarten kids, and the cross-gender acting by Brammall and Lovatt scores high on hilarity. Towards the end, a distinct moral undertone could be detected as Hecht starts pontificating about racial rights while Fleming vows never to go back to his chauffeuring days.

Praise must also go to Shaun Gurton for costume and stage design, while Nigel Levings provide his expertise in the lighting design. Their painstaking attention to detail lends an air of authenticity in the recreation of a studio office set in 1930s America.

Founder of Cooler Insights, I am a geek marketer with almost 24 years of senior management experience in marketing, public relations and strategic planning. Since becoming an entrepreneur 5 years ago, my team and I have helped 58 companies and over 2,200 trainees in digital marketing, focusing on content, social media and brand storytelling.
Lessons in Leadership from Don Quixote
Graffiti and Street Art – Vandalism or Marketing?