Humour is huge in Melbourne, especially when the Melbourne International Comedy Festival hits home.  Launched in 1987 by Barry Humphries and Peter Cook, this massive celebration of mirth is apparently the largest cultural event in Australia with close to 400,000 attendees each year. Some of the show venues were huge, like this hall here hosting headlining international actsStretching over a three and a half week period from 1 to 26 April 2009 (yeah it must start on April Fool’s Day!), the festival provides much needed light relief in a time of uncertainty. Looking at the show calendar, there must be at least more than hundred shows altogether, with many occurring simultaneously at the same time.  With that many shows happening, patrons are simply spoilt for choice, especially when average ticket prices go for just Aud$22 which is fairly affordable as far as cultural performances go. Posters of various headlining acts screaming for attention at the ticket kiosk. The menu of mirth for the day.  Did I say that you will be totally spoilt for choice in this rollicking buffet?

Through the kind invitation of Tim Richards who writes for The Age, I had the privilege of watching “A Black Sheep Walks Into A Baa…” presented by Ilbijerri Theatre.  The comedy group apparently came well recommended by the Age, which proclaimed that the group “crackles with so much black humour it’s like sticking a knife into a toaster.” Minutes before “A Black Sheep Walks Into a Baa…”

Helmed by four indigenous Australian comedians, the show presented black comedy poking fun at the relationships between caucasian Australians and native Australians in a relatively unabashed no-holds barred manner. While certain parts of the theatre performance appeared a little predictable and tired – for example the parody of Star Wars – others were pretty wicked like the election of an indigenous Australian as the next Prime Minister of Australia which had lots of Obama undertones. 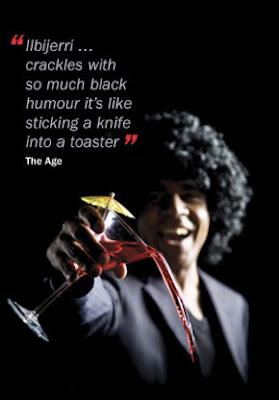 Purveyors of black humour, Ilbijerri Theatre does not shy away from ethnic jokes.

The sections of the show covering the news reports were also pretty decent, with little nuances like the presenters swaying to the left and right to catch the TV cameras.  some of the jokes require an understanding of the cultural dynamics in Australia, which I could fortunately appreciate as a cultural student here.  I especially enjoyed the part where the blonde and fair-skinned member of the group (who has indigenous Australian roots) experienced a role reversal of sorts, and experienced a different form of “racism” as a white aboriginal Australian.

Founder of Cooler Insights, I am a geek marketer with almost 24 years of senior management experience in marketing, public relations and strategic planning. Since becoming an entrepreneur 5 years ago, my team and I have helped 58 companies and over 2,200 trainees in digital marketing, focusing on content, social media and brand storytelling.
Night Festival @ University of Melbourne
Getting the Right Diagnosis