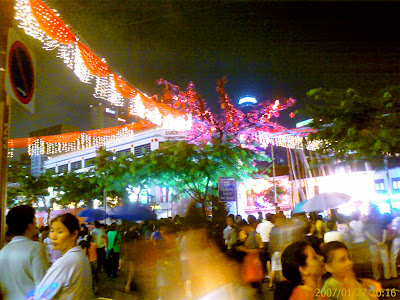 Brought the family to the Chinatown Light Up ceremony last night, amidst the drizzling rain, nursing Ethan’s raging fever (he insisted on going nonetheless), and the extraordinary crowds.

As usual, there were the fire crackers popping which ushered in the festivities, as well as the street lights. I found the accompanying reveberations and echoes rather eery – they reminded me of a warzone and sounded like multiple bullets firing away in the night. At certain critical periods, there were even low lying pyrotechnics which lit up the night sky.