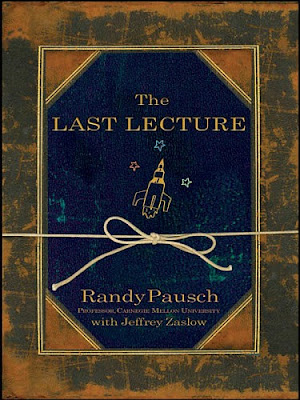 I first blogged about Carnegie Mellon Professor Randy Pausch back in 28 July 2008, 3 days after his death from pancreatic cancer. So moved was I by the video of his last lecture (do watch it if you haven’t done so), that I bought the book.  Of course, this was way before the recent death of the more famous Steve Jobs of Apple.

END_OF_DOCUMENT_TOKEN_TO_BE_REPLACED

Do you know who Randy Pausch was? Well, he did something extraordinary, and the whole world grieved recently at his passing.

Despite suffering from a terminal pancreatic cancer, he chose to leave an indelible legacy to his three young kids (and inadvertently the world) when he chose to live life to the fullest despite dying. In doing so, he inspired millions and created a revolution through a simple heartfelt message. His Last Lecture video (below) was viewed by millions, and showed the power of social media networks in spreading a message of goodwill and humanity.

A university professor at Carnegie Mellon University specialising in virtual reality and human computer interaction, Randy made history when he delivered his last lecture – both figuratively and literally – to a capacity crowd. In it, he spoke about achieving one’s childhood dreams, and the simple lessons in life that one should take whatever one’s circumstances. The presentation was especially memorable because Randy did it with a wicked sense of wit and humour, without once feeling sorry for himself despite having only months to live.