We recently went to VivoCity together with my parents, my niece Mandy and nephew Isaac.

While we generally enjoyed ourselves, the entire experience would have been a lot better if certain attention to customer details were made. For a start, the air-conditioning was butt freezingly cold, and exiting from the carpark took eons. Our first stop for the night was at Earl Swensen’s for dinner.

END_OF_DOCUMENT_TOKEN_TO_BE_REPLACED

Why Night Safari is World Class 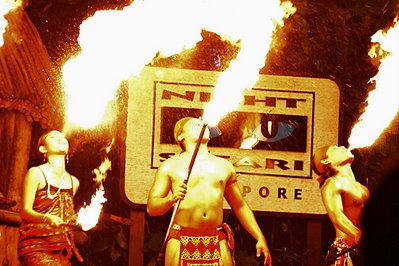 Last Saturday, I brought my family to the Night Safari, one of Singapore’s top performing leisure attraction. The place was swarming with both locals and tourists alike, and the atmosphere was simply electric. Sprawled over 40 hectares, this wildlife destination attracts more than a million visitors a year, and has won numerous Tourism Awards for being the best attraction.

What are the secrets to its success? Well, here are some thoughts from somebody who works in this industry who is also a customer.

END_OF_DOCUMENT_TOKEN_TO_BE_REPLACED

Now That’s What I Call Service!

I came across this post from marketing guru Seth Godin about service on an airline. Thought it was interesting enough to share.

Joel Spolsky shares this great story from a flight attendant:

Alright, I am gonna dote on my company for a few minutes. As most everyone on here is probably familiar with, last night was a nightmare for people travelling to and from the Northeast. We currently have 5 flights a day from CMH, 4 to/from JFK and 1 to/from BOS. Last night, out of CMH alone, Delta cancelled 3 flights, American cancelled 2, and Continental cancelled 1 and those are just flights that I know of. After we found out that our flight was delayed until 2223, the captain and the rest of us station employees decided to pool our money and we purchased pizza for all passengers on board our aircraft. Since the pizza place wouldn’t deliver to the airport, one of our crewmembers volunteered to go pick it up. Once the pizza was brought back, the passengers were boarded, our live tv and xm were turned on and the pizza was served by ALL the crew, not just the flight attendants. The Captain, FO and other airport crewmembers went above and beyond. Granted I may be a little biased, but I was glad to be here last night. The feeling of seeing that plane take off and those people get to where they are going, even if they were late was pretty darn good. Not too many other airlines that I know of will do that for their customers.

It’s not just “not too many other airlines…”, it’s, “not too many employees.” Wanna bet she had more fun than most flight attendants that day?

I wonder if we will ever encounter this in Singapore? It would be great to have char kway teow or chicken rice delivered to us on a delayed flight!