How to be an Indispensable Linchpin 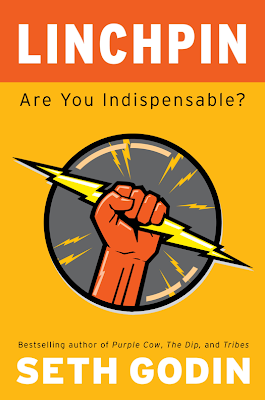 “You are not a faceless cog in the machinery of capitalism…” In fact, according to Seth Godin’s latest book Linchpin, you are an “artist who can give good gifts”. Best of all, you don’t need a canvas, a stage, nor a musical instrument to create art.

Beginning with such a delightful premise, Linchpin tackles the age-old issue of career motivation. What’s interesting is that Godin doesn’t just promote entrepreneurialism but rather, a form of intrapreneurialism – one where you as a worker in any circumstance or situation can “make magic”.
Becoming a linchpin (an indispensable widget that fastens the “corporate wheel” together) requires one to invest emotional labour in one’s job, putting one’s heart, passion and enthusiasm into it. It means going above and beyond the call of duty and giving it all you’ve got, and then some more.

To illustrate his point that linchpins can be found everywhere, Godin cited cases of such “indispensable” workers from the C-suite (Tony Hsieh of Zappos.com, Richard Branson of Virgin, and Steve Jobs of Apple) to the shopfloor. They include Mr Jason Zimdar, a graphic designer who got his dream job at 37signals without a resume, and a David, a waiter at the Dean and Deluca coffeeshop at New York who made every interaction an opportunity to connect and delight.

Godin embellishes his book with Eastern philosophies like prajna which means “wisdom and discernment” in Buddhism, and shenpa which denote a kind of reflex action “scratching the itch”. He also quotes from studies on the lizard brain (also known as the amygdala), and how we should override its propensity to drive us towards reactive and unproductive behaviours that can sabotage our success.

So what are the qualities of a linchpin?

There are 7 according to Godin, and they are:

1) Providing a unique interface between members of the organisation

3) Managing a situation or organisation of great complexity

Overall, I found the book rather positive, uplifting and motivational. Unfortunately, some of its points tend to be rather belaboured. Much of the content is written in short blog-post like snippets which read like mantras as opposed to an instruction manual, and Godin makes no apologies about that.

It was also evident that Godin’s own propensity for digital content and online publishing came across rather strongly in many of the examples cited such as Amazon.com and the Huffington Post.

Despite its shortcomings, Linchpin is a strongly recommended for those who are searching for meaning and direction in what they do. I like the fact that it doesn’t just ask you to throw everything away and start afresh, but instead, to re-examine how you – the individual – can make a meaningful impact wherever you are.

Instead of being a nameless, faceless worker in a factory in any industry, we now have the power to choose to make art wherever we are. That is a powerful message indeed.

Founder of Cooler Insights, I am a geek marketer with almost 24 years of senior management experience in marketing, public relations and strategic planning. Since becoming an entrepreneur 5 years ago, my team and I have helped 58 companies and over 2,200 trainees in digital marketing, focusing on content, social media and brand storytelling.
Montages, Mashups and Morality in Music
Contrarian Competitive Strategies