Are You Sure It Was That Obvious? 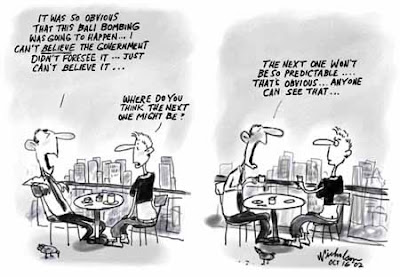 You’ve probably heard the saying that with hindsight, one has 20/20 vision.

“Why didn’t you do this then?”

“How could you have ignored those signs?”

“Weren’t you considering those factors then?”

Everybody becomes a Sherlock Holmes only when the nefarious deed is done, and the plot becomes crystal clear. Or so it seemed.

The truth, however, is that we all suffer from what psychologists call creeping determinism. Also known as the hindsight bias, the term was popularised by Malcolm Gladwell in a 2003 article from the New Yorker.

Hospitals, courts (especially the court of public opinion), battlefields and boardrooms all suffer from this. It seems that any work involving diagnosis, research, investigation or experimentation will inevitably fall prey to creeping determinism – if the sh*t hits the fence.

The danger of this is evident. Hindsight bias makes us ultra cautious and “kiasu” in our work, taking a multitude of extra steps to swing the odds in our favour.

By the time we’re ready to execute, the show is over. We would have lost that opportunity to make a significant difference. No matter how slim it was.

Hindsight bias is also the chief reason behind the blame game that we bystanders love to play. When we look back upon the past, we imagine that the people who planned for and implemented what we have experienced today didn’t get their heads screwed on right.

We then make assertions such as the following:

“Shouldn’t it be obvious then that this would have happen in the future? Why didn’t the person make the right choices then?”

“How could this person allow this to occur?”

“This must be one of the most stupid decisions ever made!”

I believe that some balance is in order. For sure, read through the case files and chronologies, and understand as much of the past as you can. Talk to those who have done something similar and learn from them.

However, do not let the fear of taking action paralyse you. Hedge your risks, but only to a limited extent. Beyond that, you should still move ahead, keep your fingers crossed and leave it in God’s hands.

In a similar fashion, do not lay excessive blame on yourself or others when things go awry. That post mortem report should be kept as a learning platform and not a “you should have known better” exercise.

Instead of naming and shaming those who made mistakes, we should address them head-on and see how these can be fixed.

Most importantly, we should try to put ourselves in the shoes of the other parties involved in making a decision then. What could he or she have done then? Were there viable alternatives that could be considered then? Remove ourselves from the heat of the moment, and act with greater empathy, mindfulness and compassion.

The next time you feel like crying over spilt milk – or point the finger at somebody who did – remember that nobody is totally prescient (except God). Instead, try to learn what you can from the situation, sharpen your craft, and move on.

Founder of Cooler Insights, I am a geek marketer with almost 24 years of senior management experience in marketing, public relations and strategic planning. Since becoming an entrepreneur 5 years ago, my team and I have helped 58 companies and over 2,200 trainees in digital marketing, focusing on content, social media and brand storytelling.
Anticipatory versus Predatory Marketing
Technology in Museums – Some Surprising Findings