Book Review: What the Dog Saw by Malcolm Gladwell 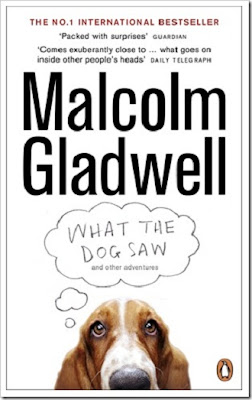 Malcolm Gladwell has an uncanny talent. Like a detective, he weaves compelling yarns, spinning together sources of information from psychologists, food testers, doctors, animal trainers, criminologists, and other experts to challenge common notions.

With journalistic brilliance honed by his years in the New Yorker, Gladwell proffered radical answers to challenge age-old notions in his latest bestselling volume What the Dog Saw and Other Adventures. A compilation of 19 essays on a wide range of topics – espionage, war, hair colour, kitchen appliances, homelessness and more – the volume blended pop psychology, sociology, management and current affairs in a highly readable prose.
In Part One – Obsessives, Pioneers and Other Varieties of Minor Genius – Gladwell introduced you to a eclectic and eccentric cast of characters. Meet Ron Popeil, a master pitchman of the kitchen appliances variety, and Nassim Taleb, a financial trader with a philosophical bent who later wrote bestselling Black Swan.

In True Colors, Gladwell explained how advertising hair dye represented the prevailing socio-cultural conditions of women during the post war years, educated you on the nuances of good and bad dog behaviours in cover story What the Dog Saw, and proposed in John Rock’s Error that the birth control pill can possibly improve the health of the fairer gender.

Part Two – Theories, Predictions and Diagnoses – suggested various hypotheses dealing with matters such as military intelligence, industrial accidents, corporate failures and more. Humanity’s failure to see the right things are repeatedly highlighted in stories which explore the failure of Enron, the problem of homelessness, and the difference between panicking and choking. The fallibility of the Israeli military intelligence, as do the devastating September 11 attacks, are similarly tackled.

On a personal note, Gladwell raised in Something Borrowed the tricky problem of plagiarism. Here he displayed magnanimity by forgiving the creator of the hit broadway play Frozen in the name of creativity. The producer Bryony Lavery quoted liberally from his own work – an article on psychiatrist Dorothy Lewis in the New Yorker – without acknowledgement.

The Final Part on Personality, Character and Intelligence looked at the evaluations one makes about others, citing educators, job interviews, talents and criminals. Here, the author tried to debunk age-old techniques in assessing people and offered to shine a new light in this field.

In the chapter on The New Boy Network, for instance, Gladwell expounded on why human chemistry oriented HR interviews are flawed, preferring instead questions which probed how a job candidate would manage real life situations. The final story Troublemakers taught us that we shouldn’t merely adopt simple easy to implement solutions when the truth might be far more complex.

Overall, What the Dog Saw combined Gladwell’s intellectual wit with a compelling narrative par none. I found myself turning the pages rapidly, devouring every morsel aimed at making me feel cleverer about myself.

While some of his suppositions do seem to bear merit, one should adopt the author’s own cynicism and scepticism while reading his work. Embrace the volume as an entertaining mind tickling tour de force rather than the gospel truth, and you’ll be fine.

Founder of Cooler Insights, I am a geek marketer with almost 24 years of senior management experience in marketing, public relations and strategic planning. Since becoming an entrepreneur 5 years ago, my team and I have helped 58 companies and over 2,200 trainees in digital marketing, focusing on content, social media and brand storytelling.
The Virtues of Writing Good Notes
The Ultimate Start Up Entrepreneur