The 5 Skills of Great Innovators 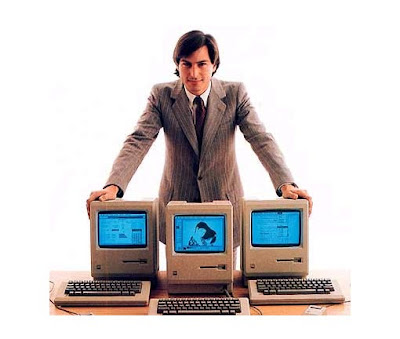 Ever wondered how disruptive innovators like Steve Jobs (Apple), Jeff Bezos (Amazon.com) and A.G. Lafley (P&G) behave?  What are the traits of these great entrepreneurs and business leaders?

According to INSEAD Professor Hal Gregersen (who co-authored the book “The Innovator’s DNA” with Jeffrey Dyer and Clayton M. Christensen), they have what are called the five discovery skills as follows:

1) Questioning – Allows innovators to break out of the status quo and consider new possibilities. This may mean becoming like a four-year old child and asking all kinds of questions.

2) Observing – Innovators detect small behavioral details in the activities of customers, suppliers, and other companies which suggest new ways of doing things.

3) Experimenting – Relentlessly trying on new experiences and exploring the world, with a habit of tinkering and fixing stuff until they work.

5) Association – Combining the above four patterns of action to cultivate new insights. Steve Jobs is a master of this, fusing his love for calligraphy with the development of fonts for the first generation Apple Macs.

Fortunately for us, the “DNA” is actually more of an acquired behaviour than an inherited trait. Most of these inventor-CEOs have cultivated them into life habits , and it was discovered that they spend 50% more time on these discovery activities than do CEOs with no track record for innovation.

To get an idea of how these innovative CEOs compare across the five skills, check out the chart below: 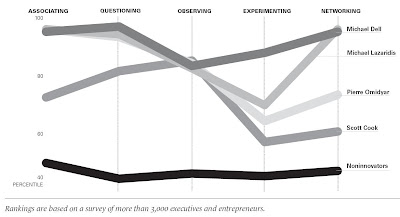 In their article in Harvard Business Review, the authors cited that Pierre Omidyar launched eBay in 1996 after using association to link three unconnected dots:

1) Wanting more-efficient markets, after being shut out from a hot internet company’s IPO in the mid-1990s;

2) Trying to solve his fiancée’s desire to find rare collectible Pez dispensers; and

3) Observing the ineffectiveness of local classified ads in locating such items.

Other than the five skills above, most of these innovators are also risk takers who are willing to challenge the status quo.  They steer clear of the conformist “cognitive bias” that many of us corporate types fall prey to and embrace a “mission of change”.

For more information on the five discovery skills of an Innovator’s DNA, watch the video below by INSEAD School of Business:

Founder of Cooler Insights, I am a geek marketer with almost 24 years of senior management experience in marketing, public relations and strategic planning. Since becoming an entrepreneur 5 years ago, my team and I have helped 58 companies and over 2,200 trainees in digital marketing, focusing on content, social media and brand storytelling.
A Wordsmith’s Manifesto
How To Create Delightful Customer Experiences