How Tightly Should You Manage Your Team? 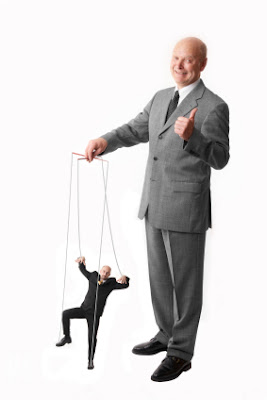 Should you control your subordinate’s every move? (courtesy of River Empowerment)

There are two major schools of thought in leadership and management.

The first approach is the older “Command and Control” style. Here, an authoritative leader uses a clearly domineering way of getting things done. Charging ahead like a bull, he/she will steamroll over anything – or anybody – who gets in his or her way. Instructions given are clear, specific and often unidirectional. Its “my way or the highway”.
Often, the nicknames used for such leaders include dictator, warlock, or Hitler.

The second approach is the newer “Let a Thousand Flowers Bloom” style. Here, we’re talking about a rather lasse fairez leader who allows his/her colleagues to run the show whichever way they want to. Instructions, if any, are often ambiguous, and members of this team need to “roll with the punches” and guard their own backs as the game proceeds.

Often, the nicknames for such leaders include country club manager, papasan/mamasan, or just the dude.

The question is this. Which leadership style should you adopt?

I suppose most of us already know the answer. Yes, it all depends on the circumstances and contexts of your organisation.

In a transitional or new organisation like a start-up, company undergoing restructuring, and M&A targets, a tougher style is needed. Here, survival is paramount, and having everybody on board and paddling in the same direction is key if one is to ride the storms of entrepreneurial uncertainty. With an objective clearly fixed in everyone’s mind, the only way to move is forward.

Some may argue that some flexibility may be needed in times of change. This depends on the maturity and experience of the staff on the team. While some leeway could be given to competent talents, the limited time and resources available often mean that one cannot spend too much time on unnecessary discourse.

In a more steady-state organisation like a market leading company or a long-time family business, a looser style of management may be useful. Here, product or service innovation, ie “what’s the next big thing”, is key. By relinquishing some control, one is able to engage the minds of one’s team in reflecting about the situation and coming up with the next “game changer”.

Often, the team members in a mature organisation tend to be more experienced and have stayed longer with the firm. The goal here is not so much to tell them what to do, but rather, to excite them and light their fires so that they can create and innovate once again.

To help you visualise this better, let me introduce two charts and theories in organisational management.

The first is the situational leadership theory developed by Paul Hersey and Ken Blanchard as seen below:

Unlike other charts, this one actually moves backwards from right to left.  Beginning from S1 and ending at S4, you can see that a more delegatory style of management is embraced as the organisation and its team matures.

Combining this with the stages of an organisation, we get the next chart below, also known as Tuckman’s Stages of Group Development: 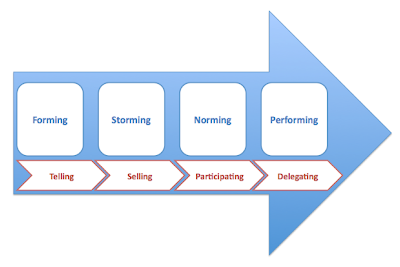 In the forming stage, everybody’s getting to understand each other’s style and here, independent players must be made to work as a team. Moving on to the next storming stage, differing views and ideas must be synergised by the leader, with a fine balance needed. Norming is what happens when teams can agree on a common goal and to move forward, and successful teams will then reach the final stage of performing. Leadership styles will then adapt itself accordingly.

From the above, one can tell that the degree of management control really depends on many factors.  Evaluate what stage your organisation is in and how ready your team members are.  Finally, of course, you must be comfortable with the preferred mode of management.

Founder of Cooler Insights, I am a geek marketer with almost 24 years of senior management experience in marketing, public relations and strategic planning. Since becoming an entrepreneur 5 years ago, my team and I have helped 58 companies and over 2,200 trainees in digital marketing, focusing on content, social media and brand storytelling.
The Thank You Economy by Gary Vaynerchuk [Book Review]
World’s First Transformers Ride Opens in Singapore