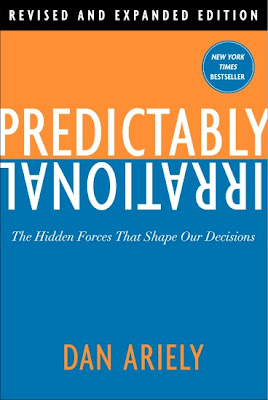 Debunking conventional wisdom that human beings are rational and logical beings, Predictably Irrational by behavioural economist Dan Ariely provides an entertaining and enlightening read in the market-tested tradition of authors like Steven Levitt and Stephen Dubner (Freakonomics series), Malcolm Gladwell, and Ori and Ron Brafman (Sway). Using the results of empirical research conducted at MIT and other university campuses, Ariely explains why we do the things we do despite their contrary effects on our health, wealth and long-term success.

Written in a light-hearted, jargon-free prose, Predictably Irrational takes us through several themes. They include the fallacy of supply and demand (ie why pricing can be so arbitrary in certain markets), the overwhelming power of FREE, the danger of turning social norms into market norms (or why you shouldn’t pay your mother-in-law for cooking a delicious family dinner), the effects of expectations (what you visualise is what you get), and two chapters on honesty and dishonesty in humans, among others.

In a chapter on the effects of relativity, Ariely highlights that we tend to look at our decisions in a relative way and compare them locally to the next available alternative. This is why we will not hesitate to add $200 to upgrade a $5,000 catering bill while clipping coupons to save 25 cents on a one-dollar can of condensed soup. Similarly, consumer marketers know that the middle priced option with moderate features may tend to sell better than the expensive high-end or cheap no-frills versions.

Taking a risque step forward to study the effects of sexual arousal on college age males, Ariely and his compatriots revealed in a separate chapter that our irrational selves (termed the “id” by Sigmund Freud) tends to take over our rational selves (the “superego”) when we’re angry, hungry, frustrated or aroused. To escape this Jekyll and Hyde (or Incredible Hulk) like influences on our behaviours, we are advised to prepare for them in our cold rational state rather than hope we can act rationally when stimulated.

Two other chapters in the book are worth noting. Both deal with the phenomenon of price and ownership.

The first on the high price of ownership explains the chasm between sellers and buyers. In a fascinating experiment involving college basketball game tickets, we learn that those who managed to “win” them after an exhausting few days of queuing were only willing to sell them for about US$2,400 each, while those “lost” that opportunity were only willing to pay US$175 for them.

This strange effect of price is further tackled in a second chapter on the power of price, which describes why a $4,000 couch will feel more comfortable than a $400 couch, or that more highly priced “placebo” drugs actually lead to faster recovery for patients. The overwhelming effect of the mind over body has led to thousands being cured throughout history as they were given the “royal touch” by the Holy Roman emperor from AD 800 all the way to kings in the 1820s!

Ending his book on a delightful note with “beer and free lunches”, Ariely proposes that businesses, governments and social institutions could design products and services that help people to make better decisions. For example, companies could include a “save more tomorrow” programme to encourage their employees to contribute their future salary raises to a savings plan. His idea of a “free lunch” seeks to provide benefits to all parties involved through mechanisms that compel people to be more vigilant and to use technology to overcome their shortcomings.

Founder of Cooler Insights, I am a geek marketer with almost 24 years of senior management experience in marketing, public relations and strategic planning. Since becoming an entrepreneur 5 years ago, my team and I have helped 58 companies and over 2,200 trainees in digital marketing, focusing on content, social media and brand storytelling.
Voyaging On Asia’s Largest Cruise Ship
This Is Why You Need To Keep Blogging and Journaling