The Dynamics of Social Ecosystems

In the age of the ubiquitous social web, business as usual is broken.

Empowered by social technologies like Facebook, Twitter and YouTube, consumers are sharing their brand experiences – good, bad or ugly. They are no longer content to “grin their teeth and bear it”. In such an environment, companies can ill afford to bury their heads in the “mass marketing” sand.

What should we then do in this avalanche of channels, content creators and communities?

First, we need to understand the dynamics of our social ecosystem.

More than the sum of its different parts, a social ecosystem comprises the relationships and interactions between an organisation, its influencers and its communities on the social web. It is affected by the powers of different players in the social sphere, their relative interests (and disinterests), as well as the enabling role of social technologies.

One way to consider how these elements interact with an organisation’s different functions is represented visually by Forrester’s Nigel Fenwick below: 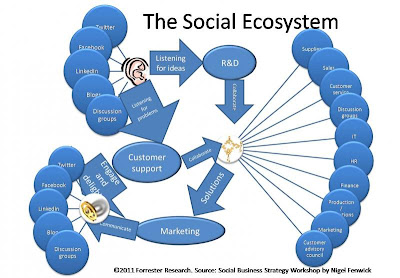 When thinking about one’s social ecosystem, it is important to consider the new dynamics of the social web. Gone are the days where a company can monopolise its point of view using mass media channels like TV, radio, newspapers and outdoor media. With everybody staring into their screens, influence is now contained in a 2″ by 3″ device in the palm of your hand.

This democratisation of information and shift from organisational broadcasts to individual interactions can be represented by the diagram below: Against this backdrop of the social ecosystem and the new dynamics of influence, companies wanting to play in this space need to understand several fundamental points:

1) Cultural differences plays a huge role in generating social influence. While social technologies and tools may be somewhat similar from Seattle, Seoul and Singapore, the topics which catch people’s interests are vastly different.

2) Key Influencers exert a disproportionate impact relative to other content generators. However, one should consider if these bloggers, Facebookers and Tweeters are relevant to one’s product or industry. As it is, many “A list” bloggers already endorse multiple brands.

3) Different topics have different momentum and resonance. While luck and chance often plays a role in determining what spreads (and what doesn’t), it is also paramount to understand the interests of one’s influencers and communities.

4) Increasingly, everybody needs to be an organisational advocate (or at least not a deviant). In a hyper-connected social ecosystem, the audience is constantly watching and listening. As long as you’re out in the social sphere putting up status updates, tweets, or posts, you’re “live” on stage.

5) Transparency becomes a norm as information spreads easily and quickly amongst different players. While there will be trade secrets and confidential information which cannot be openly divulged (eg staff performances or R&D findings), the bulk of one’s discussions can and should be open to the widest denominator.

6) More than ever before, relationship and reciprocity matters. Immensely. The chief reason why certain organisations and individuals can virtually do no wrong (while others get constantly castigated) is reflected in the investments they made into the emotional bank accounts of others.

7) Finally, and most importantly, everybody owns a piece of you. In other words, an organisation is no longer just represented by its assets, resources and people, but by its wider relationships, networks and nodes across the social web.

Founder of Cooler Insights, I am a geek marketer with almost 24 years of senior management experience in marketing, public relations and strategic planning. Since becoming an entrepreneur 5 years ago, my team and I have helped 58 companies and over 2,200 trainees in digital marketing, focusing on content, social media and brand storytelling.
Weird, Quirky and… Successful?
6 Reasons Why I Love Japanese Food