We Are All Weird: A Book Review 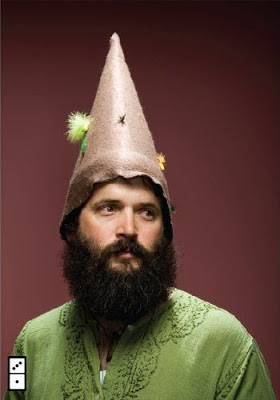 Weird is the new normal. Mass is dead.

And the rich, who is anybody who can afford to buy stuff or do stuff for fun, are no longer embracing the mediocre middle of the bell curve.

With a book cover like the one above, and a title like We Are All Weird, you can probably guess that marketing maven Seth Godin’s latest effort isn’t a normal business book.  Positioned as a manifesto with the subtitle “The Myth of Mass and the End of Compliance”, the book rehashes several familiar themes in “Sethology”:

1) Capitalism, the industrial complex, and mass markets are declining. This mandates the need for companies to embrace a different way of reaching their customers.

3) We’re now all living in the age of the “Long Tail” where goods and services need to increasingly cater to a market segment of one. This is accelerated by the Internet.

4) People are forming tribes around their unique areas of interest. These self-organising communities are not easily fooled by “fake authenticity” from companies.

Written in Godin’s characteristic snappy style, the slim 97-page volume is full of witty soundbites. Examples include the following:

– On the death of mass media… “It’s like a snowball running downhill, getting bigger and faster. Just when we expect it to get bigger still, though, it splits into millions of smaller snowballs.”

– On the fragmentation of markets… “The middle is splintering and then re-splintering. No one has the mass they want to have, and in the long tail world of choice, this means that those brave enough to seek weird will thrive.”

– On the morality of weird… “When the religion ceases to be about faith and hope and connection and love and positive change and begins to focus on compliance, this organisational embrace of the status quo runs straight into the trend toward the weird. Playing the morality card is a weak way to build a tribe.”

Two key concepts (if you can call them that) are emphasised in the book.

The first are the Four Forces of Weird, namely:

1) Creation is amplified. Through social technology, anybody can publish a book, design a T-shirt, sell a painting or customise a bicycle and reach anybody, anywhere in the world.

2) Rich allows us to do what we want, and we want to be weird. As our basic needs are met, and productivity has given us a lot more discretionary time and money, we seek unusual pursuits of pleasure.

4) Tribes are better connected. The Internet connects and protects the weird by connecting and amplifying their tribes.

The second – and more meaty – would be the Spread of the Bell Curve. Godin’s main thesis is that the main bell curve of markets, customers and products is spreading. This follows the gradual splintering of markets away from the norm towards the fringes.

This can be represented by the chart below (extracted from the book): 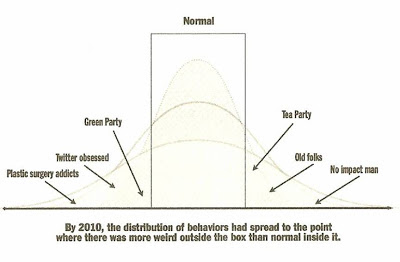 Expounding on the demise of the normal bell curve, the book provides anecdotal examples of how mass production, mass markets, mass media and mass advertising are disappearing. These cover anything from education, New York’s Union Square, men’s suits, and hedge funds to soft drink brands and Harry Potter.

As a call for action, We Are All Weird works nicely just like Godin’s other numerous publications. It challenges you, prods you to action, and make you want to go do something. However, don’t expect a road map or a compass.

Let me end with another quote from the book:

“Many marketers would like to become a modern PT Barnum (but with a better circus). That’s not the goal, though. The goal is to find and organise and cater to and lead a tribe of people, embracing their weirdness, not fighting it… This single shift in our culture has opened the door for a huge outpouring of creativity, innovation and art. Your turn.”

Founder of Cooler Insights, I am a geek marketer with almost 24 years of senior management experience in marketing, public relations and strategic planning. Since becoming an entrepreneur 5 years ago, my team and I have helped 58 companies and over 2,200 trainees in digital marketing, focusing on content, social media and brand storytelling.
Splashing Good Times at DBS Marina Regatta
Nothing But Green – a Company with a Conscience