How HP Marries Art with Technology

Through the kind invitation of HP and their PR agency Edelman, I was privileged to attend a special experiential showcase of HP’s ‘Touch the Future, Now’ technologies last Saturday night at VivoCity (11 July 2009). Its great to see technology companies focusing on enlivening the complete user experience beyond just the features and specifications alone, and HP has done a good job doing that.

Part of their “Touch the Future, Now” Campaign, HP partnered with five local illustrators (or artists as I prefer to call them) – Brian Chia, Soh Eeshaun, Ben Qwek, Neo Ann Gee and Michael Ng – to construct and share their visions for the future around music, art, communications, gaming and the cityscape in Singapore. Their works were projected within the visual of an HP TouchSmart PC on the façade of VivoCity as part of a HP ‘Touch the Future, Now’ Light Show Extravaganza.

First, I made a trip to the “Touch the Future, Now” Experiential Zone at VivoCity Central Court B. Featuring HP’s TouchSmart Technology, it allowed one to interact more engagingly with the PC beyond just the usual mouse and keyboard interfaces.1170536 by coolinsights, on Flickr” href=”http://www.flickr.com/photos/[email protected]/3713918117/”> Here, you can see some members of the public having an hands-on experience with the various HP PCs and notebooks on display. This giant screen shows the future of gaming becoming an almost cinematic experience. 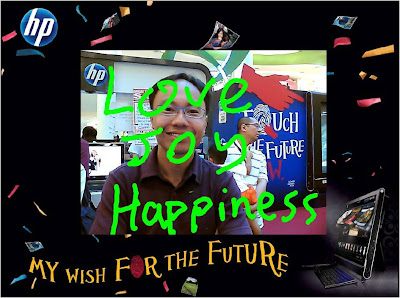 I dabbled with its Webcam software and wrote a wish for myself for the future, which is pretty self explanatory as you can see above. With so many families and kids around, it was natural that other forms of “3 D” entertainment had to be conceived to keep them happy and engaged. I wished I have brought my son here though… The next part of the programme required us to move outdoors to view the large-scale multi-media artworks displayed on the facade of VivoCity. Each digital artwork was lovingly rendered and slowly took shape on the wall, courtesy of a large format projection by HP. A total of five futuristic themes (in line with the upcoming National Day celebrations in Singapore) were developed for the artists to stretch their imaginations over the digital canvasses:
1) The Future of Music
2) The Future of Communication
3) The Future of Art
4) The Future Cityscape
5) The Future of Gaming The first display called “The Future of Music” came from Brian Chia or Brick as he calls himself. Featuring pulsating movements of sound, inspired by the digital displays of musical players online, it utilises multiple elements of patterns, rhythms, shapes and colours to express the experience of music. Apparently a crowd favourite, “The Future of Communication” by Neo Ann Gee (who incidentally is a fellow schoolmate currently studying at the University of Melbourne’s Victoria College for the Arts) was a whimsical light-hearted piece with unique characters that conveyed a comical touch. I thought many of them were inspired by medieval jesters, with their pointy hats and colourful red and white costumes. Taking on a psychedelic twist which appears to portray a coral reef like environment in an oceanic paradise, Soh Eeshaun’s “the Future of Art” called Futura-Psychedelica responded to the concept of ‘future’, through an experimental and abstract animation, using an explosive array of colours, lines, form and movement. These bright and vivid splashes of colour were guaranteed to send one’s eyeballs twitching! Michael Ng (Mindflyer) did another light-hearted portrayal in the “Future Cityscape” where floating spherical and smiling “cities” in resplendent colour assail one’s visual senses. Its certainly not a bleak “Blake Runner” post apocalyptic future, but one which is more cheery and light-hearted without that cyberpunk darkness. The final piece by Ben Qwek (MR.B) on the “Future of Gaming” seeks to glamourise the whole gaming experience, where it is portrayed as a professional sport complete with celebrities and stars. I can’t help thinking of Sheylara (a celebrity blogger and gamer girl) in this piece for obvious reasons.

Finally, here’s a short clip for you to relive the experience together with the rest of us who were there. Enjoy!

Founder of Cooler Insights, I am a geek marketer with almost 24 years of senior management experience in marketing, public relations and strategic planning. Since becoming an entrepreneur 5 years ago, my team and I have helped 58 companies and over 2,200 trainees in digital marketing, focusing on content, social media and brand storytelling.
World’s Biggest Rocking Horse and More
Of Tribes, Leaders and Heretics