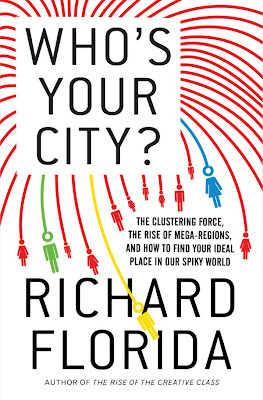 Who’s Your City was a highly ambitious undertaking by the urban theorist and economist Richard Florida to understand the importance of place in both economic and social spheres. Working with armies of researchers and statisticians from Gallup and various universities, Florida plowed through an impressive mountain of economic, social, geographic, psychographic and even cartographic (yes Florida is pretty big on maps) data to substantiate his findings.
In my view, the main thrust of Florida’s book can be broken down into four main thrusts:

First, the world is spiky and concentrated in population, economic activity, innovation, creativity and scientific activity around a few cities. Using a rather unusual technique of equating a country’s activity with the amount of light generated (what Florida termed as Light produced Resource Product or LRP), various maps showing the intense concentration of these activities were shown. Two examples can be seen below (all maps are lifted from Florida’s website).

Population in a Spiky World

Economic Activity in a Spiky World

Second, much of the world’s GDP is tightly focused around two to three dozen “mega-regions” The top 20 mega-regions in terms of economic activity account for 10% of population, 57% of economic activity, 76% of patented innovations, and 76% of the most-cited scientists. Examples include the Bos-Wash belt in the US (from Boston to New York to Washington) and Greater Tokyo (seen below).

Third, the Creative Class are exerting a disproportionate amount of influence in global economics and should be hotly woo-ed by cities wanting to leapfrog their economies. In his definition, they don’t just include artists, performers and designers, but others like investment bankers, architects, lawyers, engineers, scientists and doctors. Generally speaking, the creative class are attracted to cities that can meet not just their economic and career aspirations, but can also promise a better quality of life in terms of cultural infrastructure and physical aesthetics, its incumbent population (like attracts like), intellectual hubs (universities, conferences etc), and a pulsating energy. A chart showing their influence is seen below:

Rise of the Creative Economy

Fourth, one should also look at how living in the right place affects one’s own happiness. Choosing a city should revolve around variables like one’s life stage (single and swinging, family with kids, retirees), psychological profile (yes cities have personalities too), and a whole host of variables like the city’s physical aesthetics, basic services (healthcare, education, safety), social networks, job opportunities, and others. To help the reader along, Florida created a Place Pyramid (see below) and a multiple point checklist which helps one to make a considered and stepwise decision when evaluating a potential new home.

Citing Maslow’s Hierarchy of Needs and the work of other human behaviorists, Florida heavily emphasised the importance of one’s location as a pre-requisite for lifelong success (for individuals and cities alike). Three clusters of factors were deemed to be critical:

Naturally, such ideas were bound to attract controversy, and they certainly did. Inhabitants of the flat, non mega-regions of the world may find it difficult to accept that their cities – and to some extent themselves – are doomed for the morass of mediocrity. After all, Florida claimed that the young, talented and upwardly mobile will flee these regions to gravitate towards the financial, scientific and cultural hubs. The advantage that these cities have are so enormous that it would be almost impossible to unseat them.

Florida’s thesis are also overtly North-American and Western-centric in nature, and may not be equally applied to Asia or Africa. Notions of family, social cohesiveness, and behavioural patterns in the East are significantly different from that of the West. For example, most young adults in Asia continue to live with their family and parents after graduation, and only move out of their homes when they get married. Seniors and retirees also play a far bigger role in childcare here compared to the West.

In summary, Florida’s book is a good read for anybody looking to understand the significance of place in determining a city and a society’s competitiveness. Some of the facts cited are especially sobering, and they certainly helped to dispel any myth of a fairer and more globalised world. It may also be useful for anybody seeking to carve a better future for themselves through migration or relocation, providing information about the pluses and minuses of American cities.

However, one needs to embrace some of these concepts with a pinch of salt and consider them vis-a-vis one’s unique circumstances. Some of the facts were also conveniently neglected in his analysis – for example that New York showed a high degree of neuroticity in its personality analysis (which is anathema to creativity), and yet leads the world as a cultural capital. Critics have also panned Florida for being elitist and condemning much of the unglamorous but necessary vocations.

Founder of Cooler Insights, I am a geek marketer with almost 24 years of senior management experience in marketing, public relations and strategic planning. Since becoming an entrepreneur 5 years ago, my team and I have helped 58 companies and over 2,200 trainees in digital marketing, focusing on content, social media and brand storytelling.
The Value of Making (or Baking)
Sandy Beaches, Windy Cliffs and Artistic Rocks