All of (Capitalist) Life is But a Stage 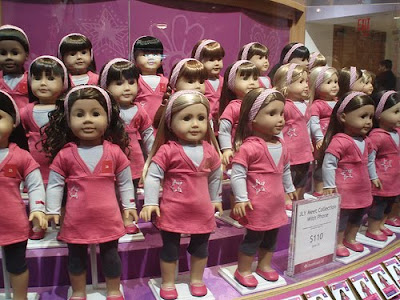 “Lights, cameras, action!” Put on your “costumes”, don your best “branded” behaviour, and perform in the stage of life’s biggest commercial brands.

That seems to be the key message of Maurya Wickstrom’s volume Performing Consumers which described the multiple ways in which big brands endear themselves to their customers through performance and theatre. Peppered liberally with theories of performativity and theatricality, the book illustrated how the creation of brandscapes in the retail environment induces deep emotional connections between man and merchandise.
Chief among these was the idea of emotional branding, which is described by Marc Gobe as follows:

“…a dynamic cocktail of anthropology, imagination, sensory experience, and visionary approach to change… Emotional Branding provides the means and methodology for connecting products to consumers in an emotionally profound way. It focuses on the most compelling aspect of the human character; the desire to transcend material satisfaction and experience emotional fulfillment…”

Unlike books proselytising positive dimensions of a customer’s brand experience through creating richly immersive brandscapes, Wickstrom’s volume comes with a warning. One should be mindful of being sucked into the system and becoming overly obsessed with “fetishing” the commodity, lusting after inanimate objects which appear more real than reality itself. Customers are “seduced” into embodying the ethos of their preferred brands through the act of performance in a highly choreographed and curated retail environment.

To flesh out her points, Wickstrom cited four case studies:

1) Niketown and the Ralph Lauren shop. Through mimesis (the act of copying), consumers become “biopolitical” labourers where their “active, creative, productive capacity” becomes the source of “power and revenue” for the companies. At Niketown, the high-tech, gym-oriented setting prompts one to embody the role of an athlete, pulsating and ever moving along the passage to a “futural, techno self”. In visiting Ralph Lauren’s flagship store, one feels as if one is arriving in the home of an affluent world traveller, soaking in the imperial/colonial splendour which is visceral and tangible, surrounded by the trappings of luxury in the golden glow of heritage and tradition. While merchandising is important, these brands aim to do a lot more than merely sell apparel or footwear.

2) The theatrum mundi (theatre of the world) in the Forum Shops at Caesar’s Palace (Las Vegas). With the recreation of classical Rome (in all its orgiastic splendour) and mythical Atlantis, Caesar’s Palace, like most other entertainment edifices in Las Vegas, employ packaging or playacting to disengage guests from reality. Through powerful and fantastic imagery, the “real fake” which one’s experiences in the Sin City takes on a surrogate form. Using animatronic “gods” performing their roles on stages, the resort is able to draft guests into the “wonders of pageantry”, imbibing in hedonistic pleasure fuelled by its “artificial authenticity”. Here, we consciously fall under the spell of greed and avarice, forging relationships with commodity (or mammon) rather than humanity.

3) The Lion King broadway performance and Disney. Here, the ideas of mimetic play is further developed in the form of the children and the young at heart wishing to embody the being of Disney characters like Mickey Mouse, Donald Duck and Simba the Lion King. By donning “princess” dresses or cartoon character costumes and immersing oneself in the “magic of Disney”, one can play a symbolic and ritualistic role in the Disney capitalist machinery. What’s interesting too is how Lion King appropriates the exoticism of the “primitive savage” in the form of post-capitalist animism to conjure its spell among children of all ages.

4) The American Girl Doll and Place. This last and most hard hitting section drew parallels between the right wing Bush Administration, thematic heritage town Colonial Williamsburg and the American Girl Doll Company. As the “mecca” of American girls, the American Girl – with a capital “G” to differentiate “herself” from ordinary girls – uses a variety of formats to epitomise the true blue American ideal. They include dolls, magazines, a website, a museum, and real life (or “reel life”) events like “Felicity’s Elegant Tea Party” (Felicity is one of the doll characters) and a stage performance called “The American Girl Revue”.

To become truly American, young girls (and their mothers or grandmothers) don fashionable but decently modest attires and are neatly coiffured. Each young lady is primed and groomed to be the perfect little girl. Though they never achieved the holy grail of becoming the true “American Girl” – the holy grail which the company hopes its customers will strive for – they do bring along their dolls to the flagship American Girl Place to be groomed, or to have that afternoon tea at its cafe while learning wholesome values.

Towards the end of the book, Wickstrom elaborated on George Bush’s Iraq campaign, using information drawn from Michael Moore’s mockumentary Farenheiht 9/11. For the Bush Administration, performance was deployed for propagandistic purposes to stoke patriotic anti-terrorist feelings amongst the population. The irony of the appalling conditions in the Abu Ghraib prison was contrasted with proclamations of freedom and courage by the former American President.

Such an example showed how powerful dramatic performances can be in manipulating the public psyche to accept a position which may be different from reality. In a similar fashion, global capitalism leverages on the tools of theatricality to envelope consumers in brandscapes, brandsenses, and perhaps even “brandcounters” (something I just coined) to recruit them as corporeal embodiments of the brand in the commercial arena. This could rob one of the ability to think independently as a human being in full command of his or her full faculties.

Founder of Cooler Insights, I am a geek marketer with almost 24 years of senior management experience in marketing, public relations and strategic planning. Since becoming an entrepreneur 5 years ago, my team and I have helped 58 companies and over 2,200 trainees in digital marketing, focusing on content, social media and brand storytelling.
Calculating Return on Marketing Investments
Are Museums All Things to All Men?