The City Built on Gold

Located northwest of Melbourne city, Ballarat was famous for being a mining town, and the site generated the greatest amount of gold during the Victorian Gold Rush of the 1850s. The city occupies an area of 740 square kilometres and houses an estimated population of over 88,000, and has a mixture of Victorian-era architecture interspersed by modern day buildings. Considered one of the state’s premier tourism destination, Ballarat attracts some 1.8 million day trip visitors and about 13% of Victoria’s annual 1.1 million overseas visitors.

Taking a walk along the streets and roads of Ballarat, one can’t help feeling that it has retained much of that old world small town charm of a bygone era, while still modernising itself. The streetscape is vastly different from Melbourne as you may have guessed, and while vestiges of gold-generated opulence can be seen in its buildings, most are classically elegant rather than overtly ostentatious. The Ballarat train station built in 1862 is the first place to check out. One can see that the name Victorian Railways befits the regal look of this building. The V-Line train from Melbourne stops here. Her Majesty’s Theatre is another popular stop where some of the state’s finest performing arts acts are showcased. The University of Ballarat specialises in the arts, and serves as a landmark here. Our next stop was the elegant Craig’s Royal Hotel, decked in Victorian splendour and established during the gold rush period of 1853. Some of the well known guests who is supposed to be staying here tonight. Or are they? At the cafe in the hotel, we decided to break for lunch. I had a delicious salmon baguette. After looking around the cafe, I noticed this rather irreverent looking mug and coaster set! We also walked around some of the sculptures in the city, like this one here which I think had some connection with the wars. As well as the majestic looking Queen Victoria, perched in her rightful place in front of Ballarat’s Town Hall along Sturt Street. The building actually had three flags – the Southern Cross used in the Eureka Stockade, the Australian Flag, and the Aboriginal Flag. More Victorian-era buildings such as the famous gold and jewellery shop called the Mining Exchange circa 1887. Of course, not all buildings are centuries old, and Ballarat does have some modern shops. Our last stop is the Art Gallery of Ballarat, an impressive attraction with a collection established since 1884 as one of the best regional collections in Victoria. We spotted this crowd attending the launch of Peter Blizzard’s interesting exhibition on sculptures wrought from iron, wood and other materials. 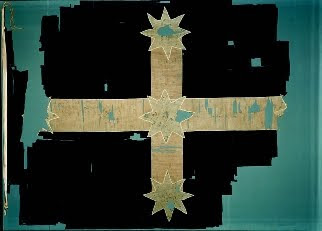 (Courtesy of Ballarat Art Gallery)
The highlight of the gallery was the display of the original Southern Cross flag. Unfortunately no photographs were allowed, but you can see here that the fabric was already fairly worn. It was postulated that some of the miners may have cut off pieces of it to retain as a keepsake.

Founder of Cooler Insights, I am a geek marketer with almost 24 years of senior management experience in marketing, public relations and strategic planning. Since becoming an entrepreneur 5 years ago, my team and I have helped 58 companies and over 2,200 trainees in digital marketing, focusing on content, social media and brand storytelling.
6 Ways to Strike Gold at Sovereign Hill
Shockingly Good Advertisements?