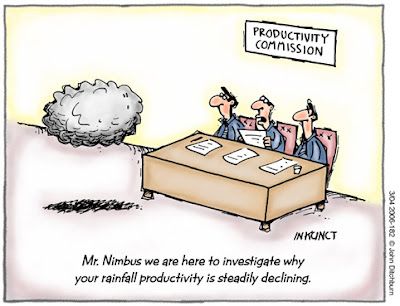 Courtesy of The Right Time Is Now

Productivity, the old panacea of economic goodwill, is making a comeback yet again. Several of our leaders have cited its importance, and the latest budget to be unveiled on 22 Feb will announce measures to boost productivity. I am certainly excited about this outcome as it may be the only way forward in a natural resource constrained economy like ours.

In order to understand what productivity is about, let us look at its basic ingredients, which is Value Added. According to Wikipedia,
,

…the difference between cost of materials and labor to produce a product, and the sale price of a product is the value added. In national accounts used in macroeconomics, it refers to the contribution of the factors of production, i.e., land, labor, and capital goods, to raising the value of a product and corresponds to the incomes received by the owners of these factors… (emphasis mine)

The computation of Value Added can be done in two ways, the addition method and the subtraction method.

In the addition method, total value added in any organisation is calculated as follows:

In the subtraction method, value added is derived as follows:

To find out how productive your organisation is, you should divide the total value added over the resources employed. The most commonly used measure is labour productivity or Value Added Per Worker, ie

The next category of productivity would be capital productivity, which is a measure of how efficiently your capital assets (land, building, factory, machinery) are deployed.

For those operating in the retail or service sectors where rentals are a premium in land-scarce Singapore, space productivity could be another measure. This could be calculated as follows:

Naturally, there is a lot of flexibility in how precisely you want to measure your firm’s output relative to its inputs. For example, some may argue that measuring labour productivity in a highly automated and capital-intensive business like wafer manufacturing may not be accurate as the bulk of investments are in machinery. The application of these measures should thus be adapted depending on one’s business.

Having understood how productivity is derived, one should then look at ways to increase one’s total output relative to one’s inputs. Gunning for sales growth alone isn’t enough if that increase comes at the expense of disproportionately higher third party costs (like rentals or utilities).

Similarly, cutting wages isn’t the solution – in fact, the whole idea behind the productivity movement is to improve the quality of life for workers and not reduce them. As such, worker salaries and benefits (training, skills upgrading) are considered outputs rather than costs.

In my next post, I will attempt to tackle some of the possibilities in raising productivity as well as the issues involved in them.

Update: Check out this easily digestible book by my friend Chun See on how employee ideas can yield better productivity. He was one of the pioneers of the productivity movement during its heydays and should know a thing or two about it.

Founder of Cooler Insights, I am a geek marketer with almost 24 years of senior management experience in marketing, public relations and strategic planning. Since becoming an entrepreneur 5 years ago, my team and I have helped 58 companies and over 2,200 trainees in digital marketing, focusing on content, social media and brand storytelling.
3 Ways to be Good, Better and Best
The Art of the (internal) Start-up