Marketing in the Age of Streams by Steve Rubel 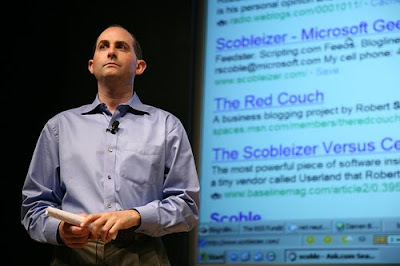 Just in case you don’t know, uber digital strategist Steve Rubel from Edelman was in Singapore (he just flew off this morning at 5.45 am) in the past few days. I had the rare privilege of meeting him personally at the kind invitation of Edelman and also to hear him speak at the MICA-CSC Public Communications Conference 2010.

Steve’s latest thoughts on what goes beyond Web 2.0 were certainly refreshing. His latest analogy likened the current information revolution to that of a bursting fire hydrant. We are all bombarded with multiple streams of data, information, contacts, video streams, tweets, photos, applications and what have you. 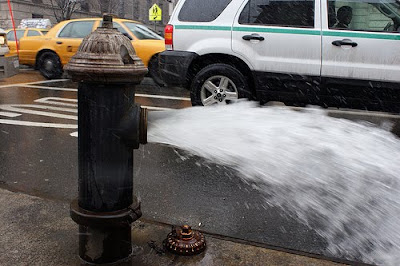 Information is like a bursting fire hydrant! (courtesy of comicbooknerd)

– He or she spends about 7 hours a month on Facebook.

– Every movie ever made will soon fit into a device the size of an iPod in 5 years time.

– There are a gazillion applications on an iPhone.

– Google is not just a search engine, but a reputation management engine.

– The greatest invention of the 20th century is the bullet point. See my earlier posts on the atomisation of attention.

In Steve’s words, “Choice is infinite, attention is finite, and we will all have a Zen moment and realise that we can’t do everything.”

People are making both conscious and subconscious choices to deal with the overflow.

Relating a personal anecdote, Steve shared that he stopped watching the local news in New York 2 to 3 years ago because of the depressing bad news that keeps getting ink. In fact, everyday a newspaper reader dies, and he or she isn’t replaced.

Digital domains don’t have it that good either. Many have dropped out of Twitter, or refrained from signing up for an account. Email bankruptcy in the United States have even resulted in a “Mark All As Read Day (Saturday, 31 May, 2008)”, where people just wiped out all the unread emails on that day. Without ever opening them.

We are increasingly snacking on media – headlines, tweets, text messages. If a point is not made in a few seconds at the top, it will be gone forever.

Here is where frequency may be more important than volume. People need to hear things many times for any message to sink in. Studies have shown that they should be exposed to it for at least three to five times before they are going to take any action.

The key to success then? Powering people!

The more human beings and real individuals you can activate, the better.

Employee engagement is critical to social success. The more surface area you can create online, the more the opportunities for success. The more you get your employees to become spokespeople – as ambassadors – the better. The more advocates you can rustle up, the bigger the share of the increasingly diminishing attention pie.

Steve offered three practical steps that you can take:

1) Build Digital Embassies and Equip Employees to be Ambassadors

You need to have a few digital bases of operation. They can be Facebook fan pages, Twitter accounts, Blogs, Youtube Channels or Flickr pages. These digital embassies could form the home ground of your emissaries.

What you need to do is to empower your experts to contribute in these social networks. They can be people working at different levels of the organisation, and not necessarily the top dogs.

An important tip though. People don’t care about you until they know that you care about them. Everybody is selfish. Consider the Jay Leno rule, his guests will spend 80% of their airtime talking about what entertains audiences before spending the remaining 20% pitching their new book or product.

We are now looking at creating multiple stories at multiple platforms all of the time. Having different stories in different media creates greater surface area.

A very good example is the White House and Barack Obama, where different stories and updates are provided on different platforms. For instance, you may get an environment story on Flickr, a terrorism story on Twitter, or a healthcare story on Facebook.

Other examples include Starbucks which has multiple social media accounts in different countries. There are many ways to interact with them online, and this could be say a job story on Twitter, the solicitation of feedback on their blog, and the telling of a corporate video story on Youtube.

In a nutshell, narrowcasting is key.

I suppose it should be pretty obvious that social media is becoming ubiquitous.

Almost every flight in the US now has Wifi. On a typical flight, people are checking their Facebook accounts, twittering, and reading on a Kindle, on all sorts of mobile and computing decice – iPhones, Blackberries, Netbooks etc.

Social networking is everywhere… Its the force.

To tap onto the force. you should look within your organisation. See if there are thought leaders who are already active in social media networks and see how they can be activated through the digital embassies.

A good company to look at is Best Buy, a big electronics retailer in the United States. Every employee can tweet on behalf of Best Buy and answer them on behalf of customers.

Credibility, surface area, and coming through in the age of streams. How you embrace the force is key to your success. Your customers and publics will hear things from friends and families. They embrace social networks.

Websites are going to be more utilitarian in nature. They are not going to the centre of the universe any more.

To survive and thrive, you want to have a hub and spoke approach. Create a website connected to social networks. Allow your customers to find you on websites, Youtube, Facebook, and Twitter. Break up messages and content on what they want to see, and how they want to see it. If possible, handcraft content packaged for different audiences on different platforms.

Finally, here are some implications and recommendations from Steve:

1) Listen and Target – a deep understanding of trusted sources and channels in Singapore (or APAC) to reach out to the appropriate audience is critical.

2) Spokesperson Credibility – tune your messages and messengers for each medium. For example, social media employees with domain expertise can be more credible than the CEO.

4) Message Multiplicity – it is no longer about one message, consistently applied across platforms.

5) Demonstrate a Movement – consider partnership with an NGO or other government/private sector bodies which are aligned with your focus areas or directions.

Founder of Cooler Insights, I am a geek marketer with almost 24 years of senior management experience in marketing, public relations and strategic planning. Since becoming an entrepreneur 5 years ago, my team and I have helped 58 companies and over 2,200 trainees in digital marketing, focusing on content, social media and brand storytelling.
We Should All Be Curators
So What’s the Big Deal about Transmedia?