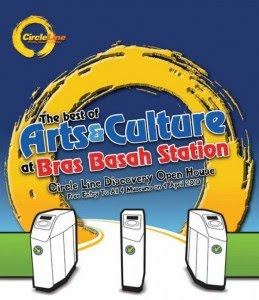 Yesterday, my family and I decided to check out the Circle Line Open House at NHB Museums after hearing about it from my colleagues. Held in anticipation of the opening of the highly publicised Circle Line on 17 April, the Line includes the Bras Basah MRT Station which is smack in the middle of the National Museum of Singapore and the Singapore Art Museum!

Despite the dreary rain and drizzle that morning, the crowds still thronged the museums. I saw queues in front of the National Museum, and many families popping into the Singapore Art Museum with kids totting their Circle Line balloons. As I’ve been to both museums recently, we decided to make a bee-line for the Peranakan Museum and the Singapore Philatelic Museum. It was great to see a constant flow of human traffic at the Peranakan Museum, many of whom are families. Our first stop was the Straits Family Sunday at the Ixora Room of the museum. These valiant volunteers were on hand to help families with their art materials. These kids were having much fun doodling, colouring and pasting. Those who preferred to read could lounge on these comfy cushions. Our next stops were the galleries themselves. Ethan went for the stamping activity as usual. We also checked out the excellent Ramayana Revisited exhibition (unfortunately its photos were too dark to showcase here). He also took some time to listen to the interactive stations explaining age-old Peranakan rituals like “An Chng” whereby a young boy was assigned to roll over the nuptial bed in the hope of the wedded couple bringing forth a son. Not exactly the most politically correct of practices, but traditions were different then I suppose. Our next stop was the Singapore Philatelic Museum or SPM. There were lots of people thronging its cosy little galleries, with children of all ages having fun (as you can see). Of course, there were lots of real kids there too. Here are some of them colouring while seated comfortably on the floor. Ethan tried his hand at this station, which showed how the different speeds of snail mail transportation. I took the chance to peak at the Philippines exhibition, which showcased the cultures and practices of the over 88 million Filipinos on its 7,107 islands. The beautifully decorated Edo dolls also attracted visitors. I overheard some visitors saying that the hair on these dolls were purported to keep growing even when cut. Anybody can verify that spooky fact? This brightly coloured room was full of kids having fun stenciling on different patterns. Naturally, Ethan had to get into the act. Finally, we checked out the bazaar (better known as Pasar Malam to us locals) at the alleyway of SPM.

Now who says that museums are boring and sterile places unfit for families? 🙂

Founder of Cooler Insights, I am a geek marketer with almost 24 years of senior management experience in marketing, public relations and strategic planning. Since becoming an entrepreneur 5 years ago, my team and I have helped 58 companies and over 2,200 trainees in digital marketing, focusing on content, social media and brand storytelling.
Appointing Customer Champions
Feeding My Mind