Like any other geek, I love glimpses into the future that technology can bring. Social technologies and mobile devices like smart phones have now evolved to the stage of bringing networked information, intelligence and interactivity to the masses.

Against such a backdrop, it was a treat to listen to Piers Fawkes, CEO of PSFK and creator of the Good Ideas Salon. Speaking on “Intelligent Cities, Innovation and Sustainability”, Piers shared about the multiple ways that urban jurisdictions can embrace leveraging on the social and mobile web.
With the Foursquare phenomenon, everybody is connected not just textually but geographically too. Mobile apps like these can now access real-time and positional information. They include shared traffic information through Waze in the US, as well as the thousands of other restaurant and food apps.

Through devices like the Withings Connected Body Scale, highly personal information like one’s weight, fat mass and lean mass can also be monitored. Such details can be sent wirelessly to a website for private (or public) access later. 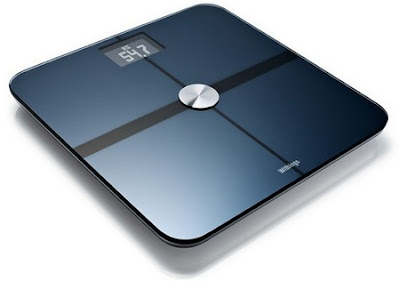 In the phenomenon labelled “PERSONAL CITIES“, devices collecting personal data about our lives can give individuals deep insight on their habits and behaviours. These systems are often passive, gathering data in the background from day-to-day activities. Over time, this information gives people the tools and motivation to improve their lives.

Can you be everywhere at any one time? With technology, you can.

AllBikesNow is a mobile application that offers users real-time information on the availability of bikes at bike-sharing stations. Perhaps more quirky is a possible solution for social feasts – Fallen Fruit – a service which creates maps of fruit trees that grow on or over public property. 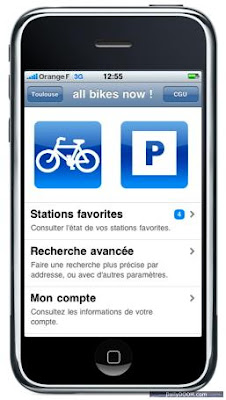 Labelling these inventions under “HELPFUL CITIES“, such systems aggregate information from publicly available data and use them to deliver useful location based services that can be accessed through the web and mobile applications.

With the push for environmental sustainability, it is important for finite resources to be consumed wisely. Many buildings can now self-monitor their use of energy and water through the intelligent consumption of utilities. An example is Intel’s Home Energy Management System, which provides applications for baby monitoring, package tracking, security systems, and home maintenance. Another example is HP Lab’s project called the Central Nervous System for the Earth (CeNSE) which monitors buildings and the weather.

On a more social level, a bar in New York City called the Exchange Bar & Grill, is planning to price its menu items as though they were stocks. The prices of its drinks and food will then fluctuate according to their popularity!

Naming these innovations under “EFFICIENT CITIES“, Piers shared that as buildings become intelligent enough to monitor their own status, they are able to more efficiently allocate resources based on usage. These services aim to match resources with those who need them when others do not. Local communities immediately benefit from sharing available resources in ways that optimise usage for everyone.

In a sense, one could aggregate one’s carbon footprints and then reward people accordingly based on their environmental impacts.

An Interactive Crime Map informs local communities of where recent crimes have occurred, and this is adopted by Oakland Crimespotting. Population movements can be also be tracked (eg Milan) using location data from cell phones for urban analysis. 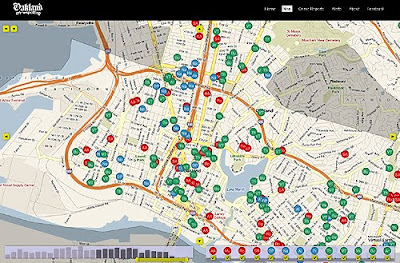 Mobile apps can also power instant citizen reporting of city issues. An example is CitySourced which allows users to immediately report any problems through their handphones.

Communal resource sharing can also be promoted through SoCal Edison’s smart grid system which alerts one on places to charge electric vehicles. Such inventions can usher in Intelligent Urban Vehicles that can drive themselves, Eg General Motors’ new electric smart vehicle. 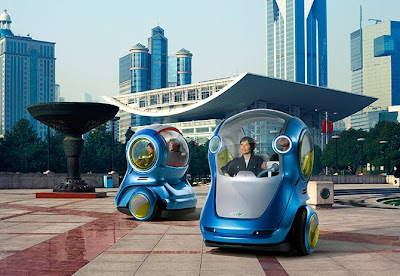 Departing from cities into the rural terrains, Biosystems Engineeering researchers at Iowa State University have also designed a network of underground wireless soil sensors. Such systems help to improve the efficiency of farming practices.

The end goal of these innovations is the creation of “COMMUNAL CITIES“. A wealth of information is exchanged between people and the city around them. What’s important though is that the real time analysis of data can lead to immediate changes in the infrastructure that help people live, work and play better. Ultimately, this could be the objective for city councils and municipalities around the world.

Founder of Cooler Insights, I am a geek marketer with almost 24 years of senior management experience in marketing, public relations and strategic planning. Since becoming an entrepreneur 5 years ago, my team and I have helped 58 companies and over 2,200 trainees in digital marketing, focusing on content, social media and brand storytelling.
The Importance of Imagineering
A Visual Tour of Shanghai World Expo