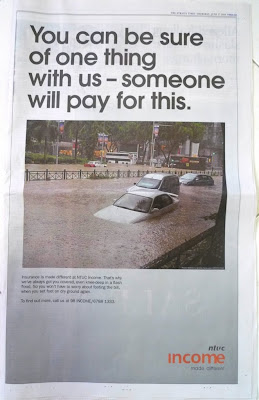 This morning, I was alerted to this full page advertisement in The Straits Times by Tessa Wong, one of its journalists on her Twitter account. Created by NTUC Income, a leading general insurer in Singapore, it caught the eye of many on Twitter who retweeted it to their friends and followers.

I applaud NTUC Income for scoring several goals (this being World Cup season) with this:

1) Taking advantage of a hot and very current issue at the top of everybody’s minds.

2) Linking it creatively to it’s products and services, without having to say too much.

3) Using a very powerful visual (a flooded car) and giving it due acknowledgement in the credit line for the photograph.

4) Writing a strong headline that is closely associated with the photograph with a nicely crafted double entendre woven into its meaning.

5) Being nimble enough to pull off such an advertising stunt despite being one of the largest insurance companies in Singapore.

The best thing about this advertisement is that it is eye-catching without being offensive to anybody. Well done NTUC Income!

Founder of Cooler Insights, I am a geek marketer with almost 24 years of senior management experience in marketing, public relations and strategic planning. Since becoming an entrepreneur 5 years ago, my team and I have helped 58 companies and over 2,200 trainees in digital marketing, focusing on content, social media and brand storytelling.
Off to Undulating Ubud
Digging Deeper To Find Gold