Royal purple is the colour this Christmas!

As I’ve highlighted in an earlier post three years ago, Singapore’s Changi Airport is well known for embracing experiential and immersive elements in its onsite marketing. Occupying a sprawling complex of buildings covering four terminals, the airport has concertedly marketed and promoted itself not only as a gateway to the world but a retail and dining destination for locals. >
Step into this magical forest..err…garden…err…oasis… err… cluster of plants!

With the theme of Christmas Fantasy (hmmm…haven’t we seen that before elsewhere?), the airport transformed a part of its extensive spaces into photo opportunity spots, complete with an “enchanted” magical tree, teapot, elves and animals. These were accompanied of course by the shopping and dining promotions that allow you to redeem gifts in exchange for spending. What I liked was how they incorporated a daily trivia challenge on both Twitter and Facebook, integrating both online and offline elements in their campaign. 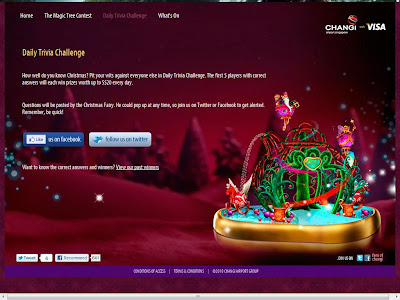 While we didn’t quite participate in the promotion then (it was an unearthly 1 am), it was nice for weary travellers like us to be greeted by a whimsical “world” full of bauble-shaped faerie folks and beasties while waiting for our post-midnight flight to Taipei. Thumbs up for keeping Ethan and Chloe amused waaay past bedtime

Founder of Cooler Insights, I am a geek marketer with almost 24 years of senior management experience in marketing, public relations and strategic planning. Since becoming an entrepreneur 5 years ago, my team and I have helped 58 companies and over 2,200 trainees in digital marketing, focusing on content, social media and brand storytelling.
The Science of Excellent Exhibitions
Engaging Customers with Game Mechanics