The latest buzzword in marketing – especially in online circles – is gaming (or more accurately game mechanics). To some, it has become the new viral, overtaking viral videos as the holy grail of consumer engagement and interaction.

Almost everybody online these days are raving about how game mechanics can change the future of company-customer interactions.

So what exactly is game mechanics all about? Well, according to this source:

“Game mechanics are rule based systems that facilitate and encourage a user to explore and learn the properties of their possibility space through the use of feedback mechanisms.”

Maybe a more useful way to describe what Game Mechanics is all about comes from Amy Jo Kim, who helps us to breaks down the participation process into five key points:

#1 Earning points – Or anything similar like credits, coupons, loyalty, chops, rankings. The use of leaderboards/flightboards are popular here as players can immediately see who is winning (and losing) in the game.

#2 Collecting – Can be virtual or physical goods such as affiliations to groups, “swords and shields”, toys, books, a set of matching crockery etc.

#3 Feedback – So that players know how well or badly they are doing. Best if this can be provided in real-time.

#5 Customization – Anything that allows you to differentiate and tailor-make your profiles. Badges are quite popular here, as well as other elements like design, personality attributes, and so on.

My friend and ex-colleague Kevin Lim has a nice and entertaining presentation on Productive Games which further explains what this is about, peppered with lots of examples both virtual and physical. You may wish to check it out below:

There are also physical examples as cited by Kevin, as well as those integrating both online and offline elements. Trendspotter Piers Fawkes has a nice list that you can find here.

With the rise of mobile computing, almost every handphone can be a gaming device.

So how can you apply the theories of game mechanics to engage your customers more richly and deeply? Well, consider the following tips from Mashable (with my own elaborations):

#1 Start With Your Vision and Work Backwards

The first thing you need to do is define your end goal.

What do you wish to accomplish? What are the exact deliverables (followers, fans, visitors, ranking, traffic) that you want to achieve?

Ideally, this should map back to your marketing and business objectives.

Next, you need to determine the specific user actions required to realize it.

What behavior patterns would they need to adopt in order to sustain your business model? What are the actions that you need them to do? How do these actions contribute eventually to your bottom line?

#3 Motivate the Most Important Behaviors

Driving any form of user behaviours, games can also be used to achieve a specific user outcome.

Mashable cited Marc Metis, President of Digital Chocolate as saying that “Games have the potential to tap into the full range of human emotions and motivate a wide range of behaviors.”

Plan the games such that specific positive actions and behaviours are encouraged. These should consider the following:

Learn to listen and respond to what your users/game players are telling you by how they play. This requires a fair amount of nuancing and modification of the game play mechanism, rewards, or social dynamics as the activity progresses.

You do not want your game rules to be too difficult (especially from the onset) as that would frustrate your user. At the same time, if your game play is too easy, it may not pose any challenge or thrill to your players. 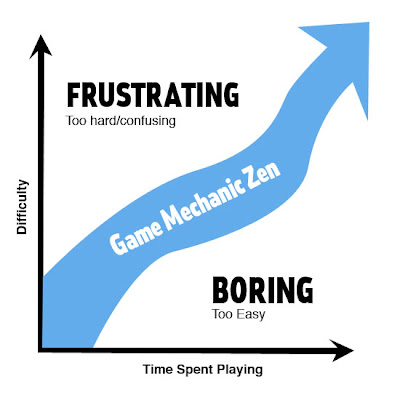 Can you achieve the game mechanic Zen? (courtesy of Mashable)

So what’s my take on this?

Well, gaming in the business world isn’t anything new. We have been using techniques such as FREE, loyalty points, membership rewards, lucky draws, refer-a-friends, and other similar mechanics to encourage greater spend, higher number of referrals, and increased profit per customer.

However, these usually tend to be boring, uni-dimensional and lack the thrills of challenge, interactivity, community-building and sustainability.

By applying the principles of game mechanics, you can make the experience more immersive than transactional while deepening engagement with one’s customer.

However, embracing the principles of game mechanics requires you to understand and consider elements of “play” from the perspective of the customer/user.

You got to make it worth their time, effort, and emotional investment, and think beyond campaign-oriented short-term rewards.

Ultimately though, it is important to think about how implementing gaming elements help to contribute to your customer equity – whether directly or indirectly so. In that regard, you should consider how relevant a particular game is to your brand positioning and values.

While it is tempting to build a Facebook or mobile app – everybody’s doing it any way – you ought to evaluate whether they help to aid or aggravate your key objective.

Like in any marketing endeavour I suppose, the devil is in the details.

Founder of Cooler Insights, I am a geek marketer with almost 24 years of senior management experience in marketing, public relations and strategic planning. Since becoming an entrepreneur 5 years ago, my team and I have helped 58 companies and over 2,200 trainees in digital marketing, focusing on content, social media and brand storytelling.
Changi Airport Goes Christmassy
Don’t Toy Around With Takashimaya