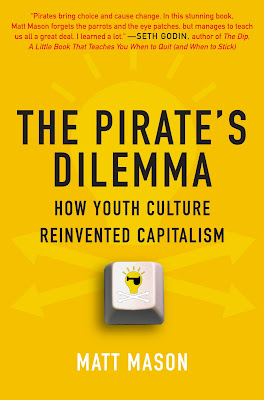 Defying the class action suits launched by record companies and copyright owners around the world, Mason declared that piracy isn’t a sin but instead, a necessary ingredient for innovation and invention. By allowing others to adapt and modify original content and spread it freely around, piracy helps to foster change in popular culture in all its forms – fashion, food, hairstyles, movies, games, software and even enterpreneurship.
From punk acts, pirate DJs on a sea fort, graffiti, remixes, disco, open-source software, to the growing hip-hop movement, The Pirate’s Dilemma painstakingly traces the origins of the different movements and the key players in those scenes.  Skillfully interlacing music and fashion with youth culture and the digital world, Mason masterfully wove little nuggets of quirky facts into his narrative.

For example, do you know that 70s disco can be traced to a nun (Sister Alicia Donohoe) trying to engage hyperactive orphans?  That Apple founder Steve Jobs supported free open-source software while Microsoft magnate Bill Gates was one of the first to oppose that?  Or that technology has advanced so much that a 3D printer capable of assembling objects may be possible in future?  DIY sneakers anybody?

How does one navigate the treacherous waters of this “brave new world”?  Mason offered some solutions in the last chapter, taking a leaf from Game Theory’s famous Prisoner’s Dilemma and transposing it to piracy.  In his version called the Pirate’s Dilemma, Mason proposes that companies should create new market spaces by competing like pirates instead of fighting them.  This creates a win-win situation for consumers, original content producers themselves and the companies involved (see below). 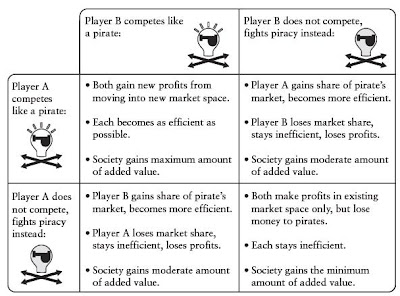 Overall, what I found particularly interesting in the book was its blending of diverse worlds – from the “dirt” to the “digital”. Underground movements like punk, garage, and hip-hop (before it became mainstream) have much in common with geeky techies and hackers operating behind computers. The invention of the remix culture, Creative Commons licenses, mashups and open-source software showed a convergence between the physical and the virtual, where music (and information) wants to be free.

To catch a glimpse of Matt Mason in action, check out the video below where he speaks about they key ideas behind the book.

Founder of Cooler Insights, I am a geek marketer with almost 24 years of senior management experience in marketing, public relations and strategic planning. Since becoming an entrepreneur 5 years ago, my team and I have helped 58 companies and over 2,200 trainees in digital marketing, focusing on content, social media and brand storytelling.
Why Bugis Junction is Still Booming
Cheap Advertising