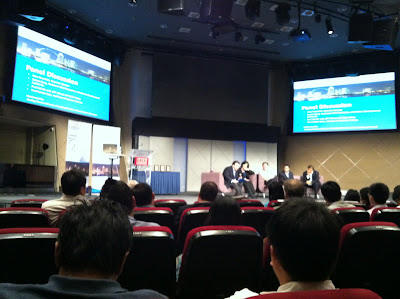 Should one protect privacy but ban anonymity on the web? Are citizens able to “DIY” to form their own self helping communities? Do we have adequate access to data that can improve our lives?

These are the sort of questions which arose from the recent GovCamp Singapore, organised by Microsoft with the support of various institutions like IDA, NUS and ISS. As I look back at the various sessions I’ve attended, here are some lessons that I’ve learnt.
Key Policy Issues

Prof Jane Fountain proposed that in considering online engagement with citizens, governments around the world have to think about the following:

2) The readiness of civil service to embrace Gov 2.0 ideals

4) The levels of citizen engagement wanted and needed

6) Understanding the constituents of digital citizens – who are they and who do they represent?

From Government to Citizen

She next shared how the Obama Administration in the US developed various social networking platforms to engage US citizens – from Apps.Gov, Idea Factory, Business.Gov to Defense Solutions. Of course, Obama himself rose to presidential fame partly due to the effectiveness of his efforts in social media engagement. These Gov 2.0 ideas are further mirrored by countries like Malta, a population of 408,373 looking to position itself as an ICT hub, and the UK which has an active programme of citizen engagement online.

Beyond the more top-down approach, examples from several countries have shown how the public could rally together using citizen sourced solutions. For example, Ushahidi – an open source and crowdsourced project – has allowed citizens to use fairly primitive mobile technologies (like SMS) to report on issues. Citizens in Sudan could also report voting right abuses while those in Haiti could use the platform to sound the alert on emergencies.

Another worthwhile case to note is Wildlife Trackers, which encourages folks to track the status of endangered wildlife species using a combination of crowdsourcing and visualisation tools. Other examples include Samasource, Crowd Flower, and Many Hands.

Perhaps the most prominent examples came from the space of using social media to incite revolutions and causes. Everybody would have now heard of the Arab Spring, beginning from Tunisia, Egypt, Libya and possibly spreading to Jordan, Bahrain, Saudi Arabia and more. Closer to home, the “Occupy” movement has shown some traction around the world, although with mixed success.

In Latin America, the “Pink Tide” is an example of radical populism where social media is used by Venvezuelan leader Hugo Chavez to villainise western corporate greed.

When the State Muscles In

In extreme cases where the State takes control of social media channels, information on the web may be filtered and propaganda is channeled – sometimes rather surreptitiously – on the social networks. An example is China’s “Fifty Cent Party” where citizens were paid to vote on issues. Another issue is that of IT firms allowing “backdoor” access to citizen data for government surveillance purposes.

In a rowsing discussion on the issue of citizen engagement, James Kang of IDA Singapore highlighted the government’s e-government masterplan termed “Collaborative Government” that hinged on the pillars of co-creating for better value, connecting for better participations, and catalysing whole-of-government transformation.  Citizen participation is key to any Gov 2.0 initiative, and it is important for the public to step forward to play their part in shaping what they want.  He then cited the possibility of introducing personal data management so that citizens can share data when they want it with whomever they wish if there is merit.

Prof Ashish Lall raised a somewhat controversial idea that one can have the right to privacy but not anonymity on the Internet. This helps to ensure greater transparency and openness in dialogue while protecting individuals from predatory marketing practices. He added that access to technology alone isn’t enough as there must be a reason for citizen activism, citing how the more positive stories seem to arise from poor countries with less developed technology infrastructure.

While there are many rich possibilities in leveraging on social and mobile technologies, several caveats exist in this space:

1) The challenge of balancing transparency and accountability with the loss of confidential data. Eg Julian Assange of Wikileaks and his war on secrecy.

2) The insatiable appetite for scandal and crisis all over the world on social media. Singapore certainly isn’t a stranger to this!

3) The trade-offs between data privacy and efficiency. In the US, major companies like Amazon has such a finely tuned consumer intelligence system that they can track behaviours, transactions, locations down to a science. In this light, citizens need to consider the balance between surrendering individual data with convenience. Eg filling multiple forms at government departments versus having a single data capture mechanism.

4) The danger of movements and causes degenerating into examples mob rules which may sometimes be misdirected and unsustainable beyond the initial uprisings.

Founder of Cooler Insights, I am a geek marketer with almost 24 years of senior management experience in marketing, public relations and strategic planning. Since becoming an entrepreneur 5 years ago, my team and I have helped 58 companies and over 2,200 trainees in digital marketing, focusing on content, social media and brand storytelling.
Imagine Wearing Your Customer’s Shoes
Dinosaurs Live! at Singapore Science Centre