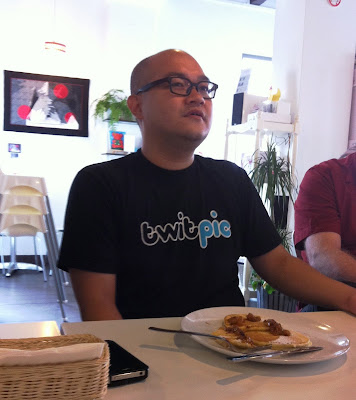 Thanks to Daryl Tay, I had the chance to attend Social Media Breakfast recently. Held at The Loft in Chinatown, it was great listening to my buddy Daniel Goh of The Good Beer Company speak about his experience in setting up a craft beer stall in a hawker centre in Chinatown. Readers may know that I first wrote about the stall when it opened back in Oct 2011.

Before he ventured into being a specialty beer seller, Daniel was a PR professional who worked in diverse companies (including mine) as well as MNCs like Samsung and Blizzard Entertainment before he ditched his corporate togs for a hawker’s apron. He also manages (and still does) a pretty solid business and entrepreneurship blog called Young Upstarts (I’m a proud contributor).
Daniel’s entry into the world of beers isn’t accidental. He spent a good 5 to 6 years studying, researching and drinking (but of course) many hand crafted independent brews before combining passion and profession as a beer hawker.

So what are some of the lessons that he has learnt as a beer entrepreneur?

Rather, the most important thing is to have a good story, albeit one that is distinctive and which can resonate with one’s target audiences. Only after you’ve done that should you look at the channels open to you.

In Daniel’s case, there are two story themes that stood out:

1) The product itself. Here, the Good Beer Company focuses rare gourmet craft beers that you can’t easily find anywhere in pubs, hawker centres or even supermarkets. By offering these finely brewed alcoholic beverages in Chinatown’s famous hawker centre at Smith Street, Daniel created what is called a “Zag” – a radical differential turned into a unique business advantage.

2) The human angle. Here, Daniel chose to tell his own story as a guy in his late 30s suffering from mid life crisis, who chose to exit from a well paying corporate job and use his severance package to do something more closely associated with the elderly.

Beyond his own beer-fueled epiphany, Daniel chose to highlight the plight and difficulties of mostly aging hawkers and the situation in Chinatown. Here, he helps to raise society’s consciousness of these important purveyors of economical but tasty food and drinks.

Naturally, Daniel’s experience in PR helped him in spinning stories which could resonate with his audiences.

Prior to media selection, Daniel shared that one should develop one’s message and determine who one’s target audiences are first. While he is pretty active on social media, he finds that business comes from a  50/50 mix of publicity on social media and the mainstream press.

Social media networks primarily work as platforms encouraging word of mouth amongst friends and friends of friends. Through Facebook (a “no-brainer”), Twitter (because he enjoys it), and more recently Tumblr and Pinterest (good for product showcases), Daniel manages to get many of his friends to patronise his outlet. While some have visited it out of novelty, others pop by on a regular basis to chill out after work.

To date, Good Beer has registered more than 800 likes on Facebook and 300 followers on Twitter. The numbers may not be huge, but the quality of his engagement and interactions are higher than most corporate pages judging by the interactions and interests shown in his posts.

Through Good Beer’s Facebook fan page, Daniel can gauge the anticipated demand for new brands based on the number of likes of upcoming beers, working with the brewery and distributor thereafter.

However, can a business survive on friendship alone?

Daniel’s answer is that “Facebook to form communities alone is just bulls**t and isn’t realistic. Sales is necessary especially for small business owners to survive.”

Daniel’s PR prowess can be seen in the significant amount of media coverage he has garnered. To date, Good Beer has appeared in Lianhe Zaobao, Time Out magazine, and more recently the Straits Times Sunday Plus (below): 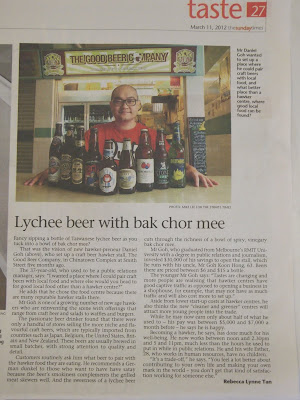 Thus far, his best business driver was a huge spread in Lianhe Zaobao’s lifestyle pages. Through the article, new beer aficionados made their way to the outlet, with some regulars buying a case of beers every week.

Daniel was particularly touched by 3 customers who came all the way to his outlet to patronise him after reading the Zaobao article. One was an elderly lady who told her younger family members to support Daniel because she knew how hard it was as a hawker, being one herself. That really moved him.

Good Beer’s highlight in Time Out Singapore was another important channel as it helped the beer hawker to reach new markets of tourists and expatriates.

Keeping the Beers – and Interest – Fresh

Daniel commented that he gets almost zero walk in crowds beyond the occasional tourist who don’t tend to buy. These travellers often prefer a local Tiger rather than a foreign exotic beer. In general, his customer base tend to be those who value premium beers due to their interest in the product.

To keep his customers thirsting for more, Daniel makes it a point to rotate his beers. With more than 50 unique beers hailing from countries like the UK, US, Belgium, Germany, Japan, Taiwan, New Zealand and more, patrons to Good Beer like the surprise factor which the modest outlet offers.

To reward high volume customers, Daniel works around his tight budget by giving away occasional bottles of beer that are very difficult to find in the market. These limited edition brews are highly valued by these connoiseurs.

Being very nice to distributors also helps Daniel to receive special favours. One way to do so is to pay them cash in full upfront rather than drag payments – a practice which differs from others in the industry. Through this, Daniel is “rewarded” with goodwill gifts like light boxes, glasses, coasters and other collectors item which he in turn gives away to valued customers.

Being a seasonal business, Friday nights are almost always maxed out, with crowds on Saturdays, while Sundays to Thursdays tend to be quieter. At times, this meant working extremely hard during that one night with barely a pause.

Daniel says that he will not opt for “Happy Hour” or discounted prices for his offpeak days as he doesn’t want to dilute his core customers. Margins are already pretty low for his products. Besides, it doesn’t make sense for a premium craft product to be cheapened.

As Daniel himself shared, “who has ever heard of a happy hour at a hawker centre?”

Beyond the Friday madness, Daniel is thankful that business is mostly smooth flowing except for the odd occasions where older uncles try to “get fresh” with his female customers. To cool their passions, Daniel would speak politely but firmly to these gentlemen.

Perhaps the greatest challenge for Daniel is staffing. Operating the stall with his 63 year old uncle alone may not be sustainable for business expansion over the long-term. However, it is difficult to find people who love the product, have the same level of commitment as he does, and is willing to work in the F&B environment.

Relying heavily on word of mouth and relationship marketing to spark his business, Daniel works with his distributors on their Facebook pages to promote the business both ways. Doing so helps to drive crowds to his outlet while actively promoting their beer brands.

The key here is to look out for partners with similar objectives and share the same messages so they can join one’s community.

To keep his community of beer lovers alive, Daniel frequently shares beer related information on Facebook or Twitter. Anecdotes such as why the Hobgoblin beer needs to be served at 15 deg C helps to stir interest while educating consumers on the art and science of tasting and appreciating craft beers. Indeed, Daniel’s deep interest and knowledge of beers makes his act a difficult one to replicate.

Interestingly, Good Beer attracts many home brewers. They visit him to share information and trade tips on brewing while quaffing down a couple of bottles.

Daniel also makes it a point to listen to his customers, specially bringing in beers that are tailored to his customer’s requirements. An example would be gluten free products that cater to their allergies.

After 5 months in the business, The Good Beer Company is already in the black. This is possible partly because Daniel keeps his costs low, spending only $338 on marketing thus far.

For the road ahead, Daniel is looking at expanding to a new space to cater to the limitations of space, capacity, temperature, and other issues in a hawker stall. He is confident that his community of beer fans would follow him wherever he goes.

The straight talking beer entrepreneur is also considering launching a beer trail with a card programme and explore merchandising as the next step. Thus far, he has benefited from the gifts from his distributors. However, having his own branded products could provide a good direct marketing tool down the road.

To conclude, let me leave you with these parting words from Daniel:

“It is easy to spot ideas but difficult to execute. What’s important after all is the experience. Being authentic allows one’s brand story to be authentic. You cannot be what you’re not. Follow your passion. In my case, that passion is beer.”

Founder of Cooler Insights, I am a geek marketer with almost 24 years of senior management experience in marketing, public relations and strategic planning. Since becoming an entrepreneur 5 years ago, my team and I have helped 58 companies and over 2,200 trainees in digital marketing, focusing on content, social media and brand storytelling.
We the Undercover Marketers
Uniqlo’s Unique Advertisement