Our Iceberg is Melting: A Book Review 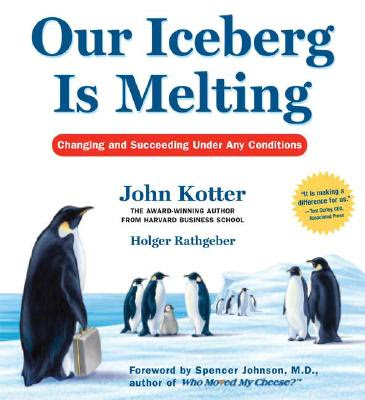 In this day and age, change is the only constant. Global economic uncertainties, socio-cultural shifts and technological breakthroughs make it necessary for organisations to adapt and transform themselves to remain relevant.

The question, however, is how one can drive change successfully in a stage littered with numerous failures.

Enter Harvard professor John Kotter, his collaborator Holger Rathgeber, and a fable about a penguin colony in Antarctica called “Our Iceberg is Melting”.

With an invisible nod to fears of global warming, the highly charming tale weaves Kotter’s eight steps of leading change to the lives of a group of emperor penguins. The escapades of avian characters like Fred, Alice, NoNo, the Professor, Buddy and head bird Louis are portrayed in vivid fashion with each playing a different role in the penguin organisation.

Faced with a seemingly inevitable disaster of a melting iceberg on which their home was built on, the penguins employed different ways to set the stage, decide on what to do, make it happen, and make it stick. These change management approaches model after Kotter’s famous 8 step process (popularised in Leading Change):

1) Create a Sense of Urgency – Help others see the need for change the importance of acting immediately.

2) Pull Together a Guiding Team – Putting together a powerful group to guide the change, with the right mix of leadership skills, credibility, communications ability, authority, analytical skills and sense of urgency.

3) Develop the Change Vision and Strategy – Clarify how different the future will be from the past and the present, and how the future can be made a reality.

4) Communicate for Understanding and Buy In – Make sure as many others as possible understand, accept and strongly subscribe to the vision and the strategy.

5) Empower Others to Act – Remove as many barriers as possible so that those who want to make the vision a reality can do so. Note that these barriers often include people (hint: organisational deadwood).

6) Produce Short-Term Wins – Create some forms of visible and unambiguous successes as soon as possible.

7) Don’t Let Up – Press harder and faster after the first successes. Be relentless with initiating change after change until the vision is a reality.

8) Create a New Culture – Hold on to the new ways of behaving, and make sure they succeed, until they become strong enough to replace age-old corporate traditions.

Through the clever use of metaphors and analogies – penguin chicks as junior staff, parent penguins as middle management, and the leadership council as senior management – Our Iceberg is Melting provides a compelling read for anybody driving change in an organisation. The use of practical approaches such as “iceposters” to communicate change and “hero medals” to acknowledge penguin scouts can easily be translated into human equivalents in the corporate world.

My favourite part of the story is how a band of chicks (the analogy for junior staff I suppose) created a penguin carnival as a way of securing much-needed fish to feed penguin scouts tasked to find a new iceberg for the colony.

By working together, they circumvented an age-old tradition amongst penguins which demanded that penguins could only catch fishes for their young. Doing so allows the scouts to swim further in pursuit of their equivalent “land of flowing milk and honey” without worrying about food.

If you’re responsible for changing an organisation (as I currently am), the book provides an excellent way to frame an often difficult and sensitive topic.

My next step? Finding a way to imbue these principles in my organisation.

Founder of Cooler Insights, I am a geek marketer with almost 24 years of senior management experience in marketing, public relations and strategic planning. Since becoming an entrepreneur 5 years ago, my team and I have helped 58 companies and over 2,200 trainees in digital marketing, focusing on content, social media and brand storytelling.
Do These Bus Handle Ads Work?
Finding Your Muse