Do These Bus Handle Ads Work? 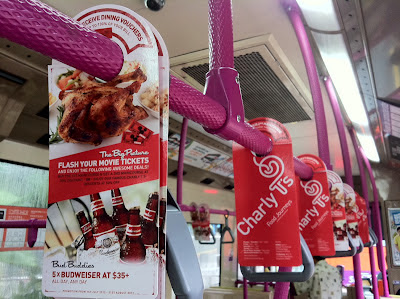 As I was commuting to work one morning, I noticed these advertisements sitting on the handle bars in the bus. Perched strategically where your hand would be, they offered a special promotion for a new F&B outlet for those who bothered to bring them there.

While the idea was pretty novel (kudos to SBS-Transit or Comfort-Delgro), I thought that the adverts could be further improved with some enhancements:

1) Focus on a simpler message that speaks directly to the consumer. For example, “Hungry for juicy mouth-watering chicken at only $___?” or some other copy that shows the value upfront.

2) Remind commuters where they can drop off the bus to patronise the outlet. Telling us your address alone isn’t enough if we’re on a bus.

4) Make it easier for commuters to stuff this flyer into their pockets or bags by shrinking it or making it softer and foldable, althought I’m not sure if that may make it less evident. The last thing that a standing bus passenger want to do is to fumble around with a large stiff flyer.

5) Do something more imaginative and creative, leveraging on the unique ambient media of bus handles. Compare the example above with the one below by Jung von Matt/Alster for watchmaker IWC in Berlin, Germany: 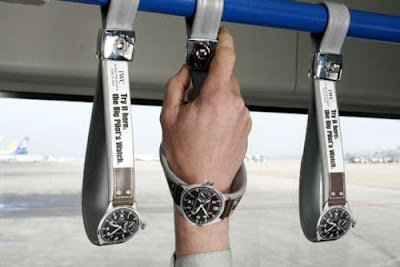 Do you think that such ambient out-of-home advertisements work? How would you improve them?

Founder of Cooler Insights, I am a geek marketer with almost 24 years of senior management experience in marketing, public relations and strategic planning. Since becoming an entrepreneur 5 years ago, my team and I have helped 58 companies and over 2,200 trainees in digital marketing, focusing on content, social media and brand storytelling.
Content Marketing Strategies for B2B
Our Iceberg is Melting: A Book Review