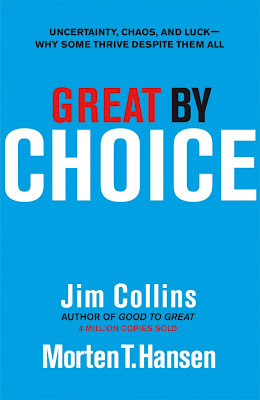 Why do some companies succeed in turbulent times while others fail?

Is there a “secret sauce” to enduring corporate performance?

I found the answers to these and more in Great by Choice, a highly thought provoking business book by bestselling Good to Great author Jim Collins and his partner Morten T. Hansen. Backed by nine years of rigorous and meticulous research – the book has more than 50 pages explaining their methodology – Great by Choice provides a nice blend of insightful analysis packed with intriguing anecdotes.

According to the authors, the secret of resilient companies which thrive under pressure is what they term as 10X Leadership. These protagonists were able to build enterprises that beat their industry averages in the stock market by at least 10 times (hence the name). Unlike lesser mortals, 10Xers do not believe that luck, chaos or any other external factor can determine their destiny.

The three core behaviours of 10Xers that differentiate them from comparison companies are highlighted below: 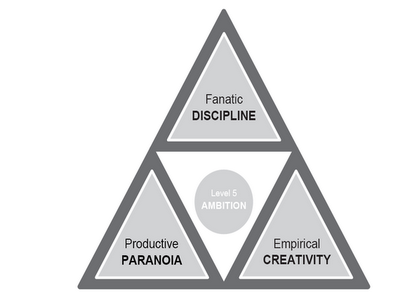 1) Fanatic Discipline – 10Xers are extremely consistent in action, adhering to strict values, goals, performance standards and methods. They are relentless, monomaniacal and unyielding in focusing on their quests.

Such organisational attributes leads to what is called the 20 Mile March. A good 20 Mile March has the following characteristics:

– clear performance markers;
– self-imposed constraints;
– are appropriate and specific to the enterprise;
– are within the company’s control to achieve;
– are bound by a timeframe – long enough to manage, short enough to have teeth;
– are imposed by the company upon itself; and
– achieved with high consistency.

2) Empirical Creativity – Evidence shows that 10X companies aren’t necessarily more innovative than their less successful competitors. However, they calibrate their creativity to a level of “threshold innovation”, leveraging on empirical evidence (as opposed to hearsay or advice) to determine their courses of action.

Here, the principle of Fire Bullets, Then Cannonballs apply. A bullet is a low-cost, low-risk, and low-distraction experiment that helps to empirically validate what works (and what doesn’t). Based on the outcomes of that, 10X companies will then fire a cannonball, investing larger resources to enable disproportionate returns from concentrated bets.

3) Productive Paranoia – Always hyper-vigilant, staying highly attuned to threats and changes in their environment (even when things are hunky dory), 10Xers always assume that things may turn against them. As such, they prepare sufficiently through contingency plans, buffers and large margins of safety.

10Xers are not unyieldingly rigid. However, they are disciplined enough not to overturn their entire enterprise just because of changing circumstances.

A core philosophy of being paranoid is Leading Above the Death Line. 10Xers prepare for any unforeseen circumstances by building cash reserves and buffers (equivalent of oxygen canisters for mountain trekkers), bound their risk (death line risks, asymmetric risks, or uncontrollable risks), and practice zooming out, then zooming in.

4) Level 5 Ambition (extreme personal humility blended with intense professional will) which is captured by the adoption of a SMaC recipe. SMaC stands for Specific, Methodical and Consistent.

A SMaC recipe is a set of “durable operating practices that create a replicable and consistent success formula”. It is clear and concrete without fluff, precise in guiding an enterprise on what to do (and what not to do) while reflecting the outcomes of empirical validation and insight.

An example is Howard Putnam’s 10 points at Southwest Airlines which includes cardinal rules such as the following:
– Remain a short-haul carrier, under two-hour segments;
– Utilise the 737 as our primary aircraft for ten to twelve years;
– Stay out of food services… and so on…

Tying up the above principles, the authors went on to conclude that 10X companies generate a better Return On Luck than their worthy competitors. Contrary to popular belief, these firms did not get more good luck or less bad luck than their comparisons.  By applying the leadership concepts above, however, they were able to survive better when hit with bad luck, and bounce back faster in times of good luck.

What I especially liked about the book was its effective use of adventure stories to bring forth key principles. They include Roald Amundsen’s successful trek to the South Pole in 1911 (aided by an obsessive need for preparation); Malcolm Daly’s rescue from Thunder Mountain in Alaska (positive return on luck aided by disciplined preparation); and David Breashears changing his mind about summiting Mount Everest at a critical moment to reduce his risk of failure.

These stories helped to flesh out the principles more vividly and to make them more memorable.

In summary, Great by Choice provides timeless management lessons that are especially relevant in an age of ever changing uncertainty and turmoil. Through empirical evidence and deep research, it reveals that that the most successful organisations adhere to sound timeless principles while retaining the flexibility to adapt to adverse situations. By staying focused and disciplined – a marathon rather than a sprint – these firms are able to thrive in adverse business climates.

Founder of Cooler Insights, I am a geek marketer with almost 24 years of senior management experience in marketing, public relations and strategic planning. Since becoming an entrepreneur 5 years ago, my team and I have helped 58 companies and over 2,200 trainees in digital marketing, focusing on content, social media and brand storytelling.
6 Reasons Why I Love Japanese Food
9 Elements of Japanese Aesthetics