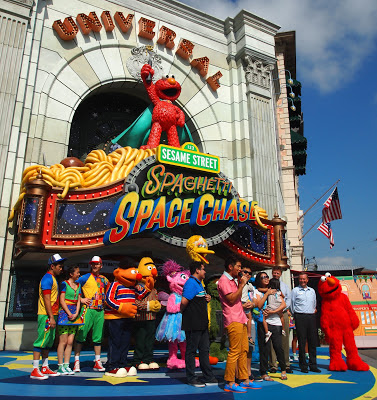 Thanks to a partnership between Resorts World Sentosa and Sesame Street, you can now experience these charming muppets “in the flesh” with a whimsical theme park ride. Launched by Universal Studios Singapore’s Vice President of Park Operations John Hallenbeck, Sesame Street Spaghetti Space Chase is the newest attraction in Universal Studios Singapore.
Located at the New York section of the theme park, the family ride brings you on a mission with super heroes Elmo and Super Grover 2.0 as they battle to stop Macaroni the Merciless from stealing all the spaghetti on Earth. You can zip through different scenes and even “travel” to space while you encounter familiar Sesame Street friends.

Visitors to Universal Studios Singapore can also meet and greet their favourite furry, feathered and funky characters from Sesame Street. Catch Elmo and friends in a musical special “When I Grow Up” or have breakfast with these cuddly monsters.

Join me now on a visual journey down Sesame Street, here in sunny Singapore! Don’t you love these cute little pinwheels? Apparently, they spin with the wind too. A ginormous pinwheel of our favourite yellow bird hanging from the plexiglass ceiling. No prizes for guessing what you’ll get here! At the launch event, Elmo made a special appearance in his scarlet furried glory and wowed the guests and VIPs with his dance moves. He was joined by several other friends, including a furry female fairy (I think she is Abby Cadabby).

Check out Elmo’s dance action with other muppets in a short video I took of the launch. As we queued for the ride, we were greeted by short videos priming us for the adventure. Here’s our space/spaghetti mobile ready to take us on the ride.

I took a short video to give you an idea how the family friendly ride was like. Its probably safe enough for young kids and elderly folks. (sorry for the poor quality as it was kind of dark) As we exited the ride, guess who welcomed us to their shop? Bert and Ernie, the dynamic male duo! You could also bring home your favourite Sesame Street muppet (or 10) of your own if you wish. From now until 3 March, visitors could enjoy street games like these. I hope these guys didn’t tear a muscle or ligament! Overall, I found it rather enjoyable to meet my favourite Sesame Street characters once again while reliving my childhood memories. Gauging by the universal appeal of Sesame Street, I’m sure “children of all ages” would enjoy these new additions to Universal Studios Singapore.

Special thanks to Resorts World Sentosa for this media invite!

Founder of Cooler Insights, I am a geek marketer with almost 24 years of senior management experience in marketing, public relations and strategic planning. Since becoming an entrepreneur 5 years ago, my team and I have helped 58 companies and over 2,200 trainees in digital marketing, focusing on content, social media and brand storytelling.
The E-Myth Revisited – Book Review
Whither Productivity?