Street art along a wall in North Richmond

Being an avid runner, I often jog around the Parkville and Carlton areas near my university campus and chance upon street art along various walls, pavements and fences.  Some of the air-brushed displays are aesthetically beautifully and probably the result of considerable and painstaking effort to create enduring works of art.  Surprisingly, I don’t see that many acts of graffiti which are overtly anti-establishment or vandalistic in nature (or perhaps I haven’t been to those neighbourhoods yet).

While musing on this phenomenon, I chanced upon this interesting article by Mark Holsworth who reported on how several merchants in the Brunswick suburb of Melbourne (just a stone’s throw away from where I am putting up at Carlton) have engaged street artists to decorate their shopfronts.  Holsworth highlighted two examples of this could be done tastefully. The first is a convenience store located at the Lygon/Brunswick area: 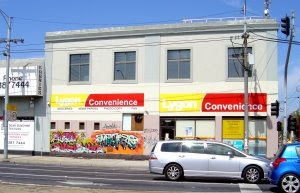 The second is a Fish and Chips shop in Brunswick: 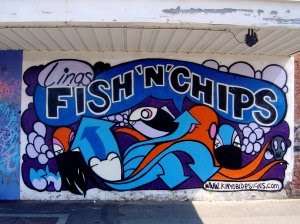 “Many businesses and private houses in Moreland commission street artists to paint walls with street facing; I looked at dozens on my bicycle ride. Many of these works have lasted for years, even decades: Jamit’s coffee cup, the first two colour stencils I ever saw, is still on the wall of a house along the Upfield train line a decade later. The piece with the anarchist robot on the side of a terrace house near Moreland station has been up for many years. The owners of the terrace house have had the advertising billboard removed preferring street art to advertising.”

I think that its a great idea to use legal graffiti for marketing and branding purposes provided they are done with care.  Some of the more practical reasons are as follows:

1) To reduce the occurrences of tagging (or unwanted graffiti) and perhaps the sticking of unwanted posters and billboards.

2) As a means of increasing consumer attention, albeit in an aesthetically pleasurable way.

3) Better engage nascent street artists and provide a legal means of livelihood for them, while being seen as being more plugged into street culture.

Retail businesses should strive to work with artists to promote their shops, depending of course on the legal frameworks that operate in specific cities or neighbourhoods.  Legal street art that is purposeful and meaningful can help increase your establishment’s “hip” factor and help to draw younger crowds that shun the ordinary and mundane.  Of course, one man’s meat may be another man’s poison, and such practices need to be molded by the expectations that one’s customers have of one’s business.

Founder of Cooler Insights, I am a geek marketer with almost 24 years of senior management experience in marketing, public relations and strategic planning. Since becoming an entrepreneur 5 years ago, my team and I have helped 58 companies and over 2,200 trainees in digital marketing, focusing on content, social media and brand storytelling.
The Madness Behind Hollywood’s Greatest Movie
The World’s Longest Lunch @ Melbourne City