Social Media in the World of Museums 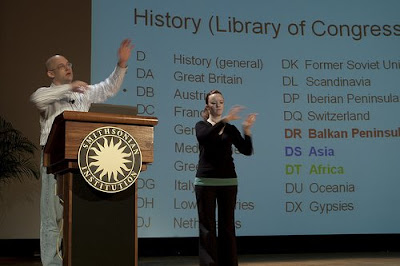 Clay Shirky speaks at the Smithsonian (courtesy of taoboy)

After several weeks of doing some online research/surfing/bumming around and asking friends (like the ultra intelligent Kevin Lim), I managed to get a handle (well partially) on what’s happening for social media in the museum world. Here’s what I found after some digging around:

First is the discovery of a blog aggregator for museums around the world called (surprise surprise) Museum Blogs! Believe it or not, there are now some 331 museums blogs (at least those which are captured here) around the world. I am glad to see that our dearly beloved Yesterday.sg is there too! Yay.
Oh yes, you can also subscribe to museum podcasts too if you wish to listen in on what’s happening in museums rather than to view layers of text.

I also read that the Brooklyn Museum, one of the foremost users of social media in the curatorial world, has used Twitter to enlist volunteers and members in its latest outreach programme. They called it a “support revolution” and have managed to make some good progress in getting folks around the world to join them on 1stfan. You can follow them on twitter too.

On the use of Youtube for museums, Beth Kanter made some questioning observations on their effectiveness in terms of drawing actual visitors and rightfully commented that behind-the-scenes videos appear to be more popular. She pointed to this interesting study on the reach and effectiveness of Museum Youtube videos on Museums and the Web (another invaluable resource for heritage social media user). Check out the Museum of Modern Art’s (MoMA) Youtube page, as well as that of the Indianapolis Museum of Art (IMA) and see which you prefer. Its fascinating to note how the number of views on these museum video sites could vary from as low as 100 views to as high as 100,000 depending on its content.

If you like participating in online discussions, check out this network called on Museums 3.0 on Ning a fairly active group engaged in various digital discourses concerning the future of the social web for museums and digital heritage. Created by Lynda Kelly from Sydney’s Australian Museum, the quantity and quality of conversations there made it a delightful read, often peppered with thought provoking and insightful contributions from various members. Highly recommended!

Finally, if you like Clay Shirky’s work and are a fan of his thoughts on social media, you may want to check out this Youtube video of him speaking at one of the Smithsonian Institution’s 2.0 event. There is a blog post by Mia Ridge capturing the key thoughts of this which includes the value of Flickr to museums, how artefacts could be “hubs” in a “hub and spoke” world and the nexus of attention radiating outwards from them, the value of tagging, as well as the formation of communities of practice.

Mia also wrote about an earlier Clay Shirky talk in London which focused largely on the thrust of his book “Here Comes Everybody” and highlighted some examples of social media being used effectively for citizen activism – Barack Obama’s election campaign website and the “Yes We Can” music video, Gnarly Kitty’s posts about the Thai Coup, and No Pants Day by Improv Everywhere ( a kind of flash mob group).

It will be interesting to see how new media tools could be employed for grassroot evangelism for museums in Singapore, learning from the various practices around the world.  Over at the National Heritage Board of Singapore, we are trying various ways to encourage Word Of Mouth which could hopefully win us new fans in the longer-term.

Founder of Cooler Insights, I am a geek marketer with almost 24 years of senior management experience in marketing, public relations and strategic planning. Since becoming an entrepreneur 5 years ago, my team and I have helped 58 companies and over 2,200 trainees in digital marketing, focusing on content, social media and brand storytelling.
Rural Delights @ Collingwood Children’s Farm
Can We Truly Market the Arts?