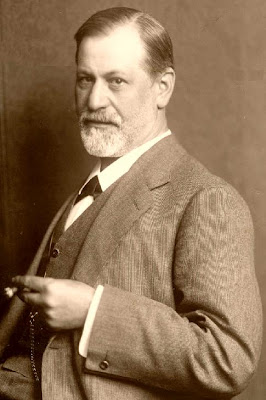 As a current student in humanities, I have generated an interest in its various fields like sociology, psychology, anthropology and geography. Being a marketer and communicator, my focus is to see how these wider fields in social sciences influence the outcomes of consumers and markets. By understanding the various dimensions of human behaviours in individual, group and community settings, I hope to devise strategies and tactics that can match those characteristics.

After viewing the blockbuster exhibition Liquid Desires featuring Salvador Dali at the NGV, I learnt that much of his art was influenced by ideas which stemmed from Sigmund Freud. Being curious to learn more about Freud’s theories and influences – without going too deep into the intricacies of psychology – I picked up a slim volume titled Introducing Freud by Richard Appignanesi and Oscar Zarate. Heavily illustrated in a highly whimsical fashion, the book described the life of Freud as well as his major contributions as the father of the psycho-analytical movement.
Born on 6 May 1856 to Jewish parents in Freiburg, Moravia, Sigmund Freud lived most of his life in Vienna, Austria. Upon completing his medical studies in 1881, Freud developed interests in histology and neurophysiology and was influenced over the years by various eminent academics like Ernst Brucke, Hermann Nothnagel, Theodor Meynert and Jean Martin Charcot. Various cases influenced his ideas, and the most famous ones include Anna O, Little Hans, and the Rat Man, amongst others.

One of his earliest interests was in the condition of hysteria, which was thought to be either an irritation of the female sexual organs, or mere imaginary play-acting by women (19th Century Europe was still very sexist)! Some of his early therapies include the method of catharsis (invented by his friend Josef Breuer), the use of the pressure technique (where one presses one’s hand on a patient’s forehead and asked questions), and the seduction theory.

The most monumental contribution made by Freud was in the area of psychoanalysis, which largely involved the free association technique. This involved mentally disturbed patients being allowed to freely recall traumatic events and to say whatever came to mind. In 1896, Freud also wrote The Interpretation of Dreams, which spoke about his own dream and how it embodied a childhood wish of a death wish aimed at the father and a sexual one at the mother. The most famous example of this was captured in the Oedipus Story which Freud later named as the Oedipus Complex – an incestuous fantasy falling in love with the mother and jealousy of the father.

To understand dreams, Freud made two discoveries, namely that “all dreams represent the fulfillment of wishes” and that the “functioning of dreams provides systematic evidence of the unconscious”. Dreams often express one’s repressed unconscious wish, often in a partial or censored version, and the latent content of the dream can only appear when disguised as manifest content. Manifest objects either suggest penetration (like swords, guns, umbrellas etc) or receptables (like boxes, purses, caves etc) which are proxies for the male and female sexual organs. The “shifting over” of the wish to such manifest objects was called displacement by Freud. Concepts like castration anxiety and penis envy were also suggested then.

According to Freud, the mind is divided into the preconscious (which contains all the ideas and memories capable of becoming conscious) and the unconscious. The unconscious mind is made up of desires, impulses or wishes of a primarily physical instinct, and would look towards fulfilling the needs of pleasure – also known as the Pleasure Principle. In publishing Three Essays on the Theory of Sexuality (yes, he was quite obsessed with that), Freud claimed that the mouth and anus were involved in psycho-sexual development, which first starts with the oral stage followed by the anal, phallic, latency stages (age 6 to puberty) when the sex drive disappears, and the final genital stage (reappearance of sexuality during adolescence).

In Freud’s world, many neurotic problems are traced to childhood. Fixation or arrested development of the libido may occur, and this could lead to regression and the onset of adult neuroses. Interestingly, he also created the idea that all human beings are bisexual in a certain way and that pure masculinity or femininity does not exist. The counterpoint of the Pleasure Principle was the Reality Principle, which allowed organisms to tolerate delays and deferments of gratification, and facilitated thinking as well as productive work. During the mechanism of sublimation, libidinal energy is redirected towards an adaptation to reality – ie the process of mixing work with play.

Considered as a 3rd Revolution (after Copernicus’ discovery that the Earth is not at the centre of the Universe and Darwn’s Theory of Evolution), Freud’s Psychology of the Unconscious states that only a small part of what is mental in conscious, with a large part made unconscious. Freud was also responsible for the idea of transference whereby hostile unconscious feelings were made conscious and “transferred” to the therapist. When this fails, the psychotic cases were referred to as narcissistic, where the ego is directed back to the self and regressed to conditions like megalomania, schizophrenia, and hypochondria.

In Mourning and Melancholia (1915), Freud carried this idea further and wrote about the idea of extreme identification called introjection, where one’s lost love object is literally “devoured” by the ego, and the patient regresses to infantile narcissism. The death instinct was also covered, where ideas on how all behaviours are used to reduce tension was proposed and the condition of repetition-compulsion, whereby the painful memory is relived again and again in attempts to get back to a condition totally devoid of all energy – death.

Freud’s final contribution was in the dynamic model of the mind called the Id, the Ego, and the Super-Ego. His ideas here was that the ID (Latin for ‘it’) is the primitive, unconscious basis of the psyche dominated by primary urges, the ego is the guide to reality which encompasses the conscious mind, and helps to repress the id, and the super-ego is introjected parental authority – a defensive effort which prohibits the expression of Oedipal wishes. Thus, our behaviours are not due to strict moral ideas but due to our renouncing of aggression.

From 1902 to 1908, Freud started the Vienna Psychoanalytic Society with eminent followers, the most famous of whom was Carl Gustav Jung who had a famous split from Freud as he felt that Freud extended the idea of sexuality too far. Naturally, Freud’s ideas resulted in a lot of resistance during his time, and one can see why judging by how controversial they are. While some of his theories have since been debunked, his main contributions to psychoanalysis were still monumental, and they helped us better understand the complexities of the human mind.

Founder of Cooler Insights, I am a geek marketer with almost 24 years of senior management experience in marketing, public relations and strategic planning. Since becoming an entrepreneur 5 years ago, my team and I have helped 58 companies and over 2,200 trainees in digital marketing, focusing on content, social media and brand storytelling.
Eureka! Its Australia’s Golden Moment.
Putting Ideas into Action