We were all pretty excited as we board the Coca-Cola bus which brought us to the World Expo site adjacent to the Huangpu River. Here are some of the passes, tickets and wrist-bands needed to gain exclusive entry. At the Expo site, we were greeted by these chirpy employees from Coke, who acknowledged us as Coca-Cola VIPs. Here’s how the “Happiness Factory” aka Coca-Cola pavillion looks like. Drink stands like these were everywhere at the World Expo site, courtesy of Coca-Cola, the official beverage sponsor. These characters from the Happiness Factory were ubiquitous. Over there, they are perched cheekily on top of a roof. More of the Coke characters “performing” on a stage. Perfect for photo moments. Once inside the pavillion, these various Coke memorabilia greeted me in the factory like setting. The text panel here highlighted Coke’s environmental sustainability initiatives. Smile and say “cheese” at the Employee of the Month corner! Along the way, we were greeted by screens like these showing introductory “pre-briefing” videos. The anticipation was similar to that of visiting a theme park ride at Universal Studios or Disneyland. Once inside the scarlet red theatre (of course!), we seated ourselves comfortably for the main event. Members of the audience could be heard gasping, “Oohing”, and “Aahing” during the screening of the short Happiness Factory movie.

Unfortunately, I can’t bring that screening to you. However, the Happiness Factory movie above (which shows what happens inside a vending machine) may be a good representation. After that cinematic experience, we were ushered out and greeted by more 3D Coke characters. Everybody was given a special sized bottle of Coke, chilled to between -2 and -5 deg Celcius. …and that was of course drinking it. However, we were taught by this girl to turn the bottle a few times, twist open the cap to let some gas escape, and witness the formation of ice crystals in the drink before imbibing it. The taste was awesome of course. More snowy characters from the set of the Happiness Factory. These little posters on the ceiling were full of friendly sayings on how you can use your Coke. I couldn’t resist this photo opportunity next to a giant bottle of Coke and those luscious lips! Outside the pavillion, I chanced upon this souvenir shop and bought some collector’s item bottles. These young kids enjoyed posing with the characters, while watching out for those bright red lips. 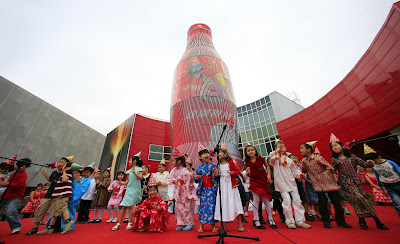 Kids brightly dressed in national costumes with equally bright smiles preparing for a performance on stage. (photo courtesy of Coke) On one of the walls, Alvin and myself couldn’t resist striking some silly poses. Feels like a “Where’s Wally” game. The ultimate tribute to Coke’s birthday celebration by one of our fellow bloggers from Korea.

Founder of Cooler Insights, I am a geek marketer with almost 24 years of senior management experience in marketing, public relations and strategic planning. Since becoming an entrepreneur 5 years ago, my team and I have helped 58 companies and over 2,200 trainees in digital marketing, focusing on content, social media and brand storytelling.
Why Silver can be Sensational
The Impact of Macroforces on Coke’s Strategy