Be a Participatory Citizen at GovCamp 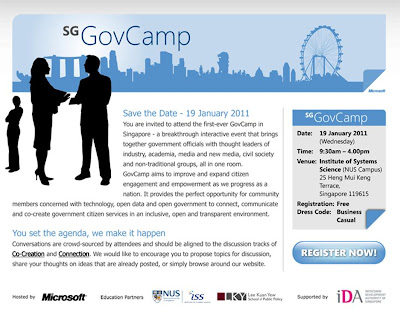 Want to play a part in shaping how government can better serve you through social technologies? Got a burning desire to change the delivery of essential services? Why not participate in the first ever Singapore GovCamp?

Taking place on 19th Jan (Wed) on NUS Campus, Singapore GovCamp hopes to “connect the Government with the general public and private sector to communicate, collaborate and co-create government citizen services, improving and expanding citizen engagement and empowerment.” Its the first time that such a platform has been mooted so I guess it should be pretty interesting.
Oh yes, I forgot to mention that this is a FREE event open to everybody.

As part of the programme, you’ll get to hear from several eminent speakers in this space. They include Zachary Tumin from the John F. Kennedy School of Government at the Harvard University, Barry Libert, the CEO of Mzinga, Pallab Saha from the National University of Singapore (NUS), as well as Ashish Lall from the Asia Competitiveness Institute of the LKY School of Public Policy.

Other than the few appointed speakers, the rest of the agenda is entirely open. So you can decide what you want to speak about and feel free to get something off your chest! The discussions revolve around two pillars: Co-create (moderated by my friend Preetam Rai) and Connection (which I’m helming).

The one that I’m moderating – Connection – looks at how you can contribute ideas on how we can leverage any technology to bridge the generation, perception, service, communication or any other gaps. I suppose its also about considering how networks or platforms can be created to allow the government to draw closer to the public. Join the discussion here.

To set your mind racing on the possibilities, here’s a nice set of slides on Government 2.0 by Don Tapscott (courtesy of Marco Deksen) that illustrates some of its key principles:

In the spirit of Barcamp, all sessions are highly interactive, not one-way presentations. If there is a topic you would like to lead, you can propose it in the discussion section where it will be voted on by other attendees. The top sessions will be slotted into the agenda.

Register now by just filling up a simple form here!

Govcamp is jointly organised by ISS of NUS, the Lee Kuan Yew School of Public Policy and Microsoft, together with the support of the Infocomm Development Authority of Singapore (IDA).

Founder of Cooler Insights, I am a geek marketer with almost 24 years of senior management experience in marketing, public relations and strategic planning. Since becoming an entrepreneur 5 years ago, my team and I have helped 58 companies and over 2,200 trainees in digital marketing, focusing on content, social media and brand storytelling.
Don’t Lose Your Way (Garmin-Asus A10 Review)
Day Trippin’ in Johor Bahru