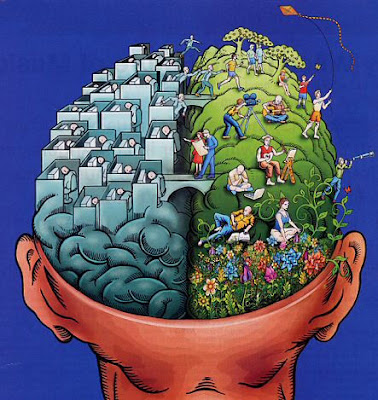 Last night, I decided to catch a much talked about TED talk by Dr Jill Bolte Taylor and boy was I blown away! In the video, the celebrity neuro-anatomist described her experiences when she suffered a stroke on her left brain and painted a beautiful and vivid picture of that somewhat transcendental encounter. From that incident, she was able to isolate the functions of both brains via a first person perspective, showing how the two cerebral hemispheres (connected by a bunch of tissue called the corpus callosum) interact and work with each other.

Here’s the video for your viewing pleasure:
:

I suppose the question that we sometimes wonder is this: are we more left brained or right brained? Well, there is the spinning dancer test which asks which way the two ladies below are spinning.

Apparently, if you see them go anti-clockwise, you’re using your left brain while if you see them spin in a clockwise direction, you’re supposed to be using your right brain. Well, further research has shown that this myth may be debunked (if you stare long enough, you’ll see the ladies spin both ways).

OK, back to debate on the left versus right brains. In Jill’s talk, the left cerebral cortex is like a serial processor, concerned with bringing order to the universe, while the right cerebral cortex is more like a parallel processor at one with the world. By having a brain haemorrhage on her left brain, she was able to perceive what the right brain was truly about – feeling, intuition, spiritual and absorbing.

These and other well documented differences can be depicted by this chart: 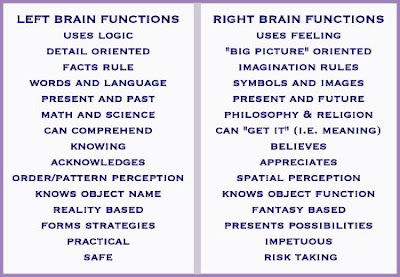 Or this diagram, which gives a more thorough breakdown between the two mushy hemispheres: 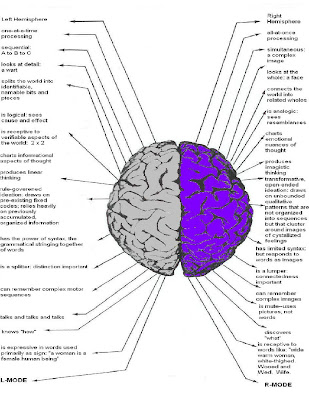 A common perception amongst many of us is that we don’t use enough of our right brain. After all, much of work and life is about doing things in a sequential, logical manner isn’t it?

False. Apparently, we do use it all the time, even when doing the most mundane everyday thing. Here’s a list of nine ways in which we use them almost everyday (from You can Draw):

Backing your car, catching a baseball, shooting a basket, lining up that picture on the wall, decorating your home, singing in the shower, (or just plain singing for that matter), daydreaming, tossing a candy wrapper in the waste basket, matching clothes..

The next time you think about how your brain works, consider how both halves of your brain work together seamlessly to make you who you are, and marvel at the wonder of it all.

Founder of Cooler Insights, I am a geek marketer with almost 24 years of senior management experience in marketing, public relations and strategic planning. Since becoming an entrepreneur 5 years ago, my team and I have helped 58 companies and over 2,200 trainees in digital marketing, focusing on content, social media and brand storytelling.
Cheap Advertising
HP Hops on Tablet Train with TouchPad