The Truth About Ikea: Insights from an Insider

{UPDATED 29 JANUARY 2018} The world is moaning the passing of Mr Ingvar Kamprad, founder of Ikea and IKANO. According to the Ikea Group website, he passed away at the ripe old age of 91 years after a short illness.

Ikea has always been one of the companies which I respect tremendously. In fact, many of the furnishings in my home came from the privately held Scandinavian retailer.

The colossal furniture giant now has a total of 314 IKEA stores in 38 countries/territories. Known for his radical ideas and extreme thrift, its legendary founder Ingvar Kamprad is probably one of the richest persons in the world.

Having heard so much about the Swedish furniture conglomerate, I couldn’t resisting borrowing the book The Truth About Ikea: The Secret behind the World’s Fifth Richest Man and the Swedish Flatpack Giant from our library.

Authored by 20 year Ikea veteran Johan Stenebo, it provided a fascinating insight into what “really” happened behind its hallowed blue and yellow walls.

An insider who was once Managing Director of Ikea Greentech AB, Stenebo writes with strong conviction. The book is divided into three main sections – Ingvar Kamprad, The Company, and The Future.

In the chapters on the founder, Stenebo’s perspective as a former assistant of the company chief gave him a unique perspective into Kamprad’s leadership style. Reading the book, I got the impression that a highly driven, intelligent and cunning corporate leader lie beneath the public facade of Kamprad as a bumbling old gentleman who was always smiling, “alcoholic,” and extremely stingy.

Stories of Kamprad’s miserliness seemed to be mostly true (according to Stenebo). Company executives were forced to ride economy on long flights and they stayed in cheaper hotels worldwide. Kamprad himself lived rather squalidly for a man of his means, and the story of him driving a beat up Volvo prevailed.

The founder’s management savvy could also be seen through how he manages meetings, allowing senior managers to say their piece before making the final decisions.

I found the section on the company itself the most interesting.

Here, you could learn how supply chain management and consumer oriented design and production of furniture ranges played pivotal roles in the global Swedish giant.

While most of us are familiar with the retail shop fronts of Ikea with its characteristic flatpack and DIY style furniture, it is the extreme efficiency of its raw material sourcing, production, logistics, and purchasing machinery which helped the retail megastore to achieve success.

According to this website, over 50 percent of the products from Ikea are made from sustainable or recycled products. As a high volume mass retailer, Ikea buys products from more than 1,800 suppliers in 50 countries, and uses 42 trading service offices around the world to manage its supply chain.

Testament of a Furniture Dealer

Stenebo also wrote about Ikea’s winning culture which was embodied in the surprisingly simple theses of its Testament of a Furniture Dealer as follows:

You can download and read a copy of this publicly available document here.

Heirs to the Empire?

Perhaps the juiciest part of Stenebo’s Swedish accented narrative (admittedly, his English took some getting used to) was the final chapter on how the company is heading towards uncertain time.

Here – and perhaps throughout much of the book – Stenebo wrote about the different characters in the “Kamprad-Sphere” and appeared downright pessimistic about Peter, Jonas and Matthias Kamprad. These heirs to the Ikea empire were painted as highly incompetent managers who lived forever under their father’s huge shadow.

As an outsider, I felt that the prognosis appeared to be a little harsh. Unfortunately, there is no way for us to debate the truth.

The final chapters also illustrated how Ingvar Kamprad disguised his wealth through complex company structures formed in different countries with the aim of avoiding taxes. It furthered shared candidly what being environmentally friendly truly meant for Ikea, and how it used donations to NGOs and clever public relations to appear more sustainable than it truly is.

Swinging between admiration and criticism, it seemed clear from the book that Stenebo has a love-hate relationship with his former employer.

While the book was generally quite readable, once you get used to its writing style, it appeared at times to employ heavy rhetoric in getting a point across while making mountains out of molehills.

Despite its cover, I didn’t really find it that sensational. However, it did help me to understand the human dimension of managing a large MNC and the issues that could possibly be faced by huge retailers like Ikea. 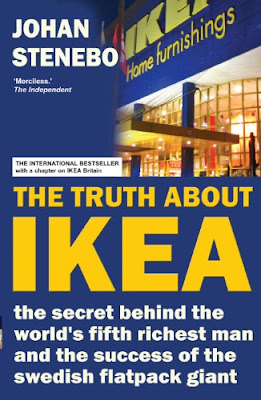 Founder of Cooler Insights, I am a geek marketer with almost 24 years of senior management experience in marketing, public relations and strategic planning. Since becoming an entrepreneur 5 years ago, my team and I have helped 58 companies and over 2,200 trainees in digital marketing, focusing on content, social media and brand storytelling.
Lenovo Ups the Ante in Brand Marketing
How to Effectively Manage Business Costs