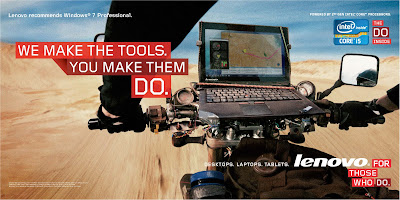 In their latest bid to conquer the global PC market, China-based Lenovo (famous for acquiring IBM’s PC business in 2005) is placing its bets on an action-oriented new brand campaign. Called “For Those Who Do”, it revolves around the concept that it is a “Do” company focused on action, creating tools for “Doers”. These are people who use technology as a tool to help them achieve their goals, and not just a badge to some cool club.

Rolling out in emerging markets like Indonesia, India, Mexico and Russia, the campaign covers the whole spectrum of brand-led integrated marcoms – advertising, product packaging, web, retail, billboards, banners, TVCs, Search Engine Marketing and more. To understand the essence of the campaign, check out their TVC below:

To tell us more about Lenovo’s campaign, I email interviewed Howie Lau, Lenovo’s VP of Marketing for EMG to catch some of his thoughts on this.

1. How does Lenovo position its brands vis a vis the global competition? What makes it different from say HP, Dell, Asus and other leading PC brands?

Lenovo recently rolled out a new brand campaign and positioning called “For Those Who Do”. It revolves around the concept that we are a Do company that is focused on action. We feel that “For Those Who Do” is an authentic position for Lenovo because it specifically defines who we are as a company. Lenovo at its core is a company focused on action. As Lenovo employees, we do what we say, and we own what we do.

Lenovo is a global company powered by innovators and inventors who are obsessed with making perfect tools for Do-ers – people who see technology as an integral part of their lives. Lenovo’s products appeal to the people who get out there and make things happen – people with the Do mindset. Our products are rock-solid, highly functional tools that allow people to accomplish more, with tangible achievement.

2. What is the unique differentiating factor for Lenovo beyond price and design?

Lenovo places utmost focus on the quality of innovation to achieve competitive differentiation. Our innovation strategy is based on a two-tiered approach to solving real-world customer problems – the first is to focus the majority of development on ideas that can be brought to market within 24 months, and the second is to invest long term in research, targeting ‘game changing’ big plays.

Some examples of our truly innovative products:

– Our Lenovo ThinkPads are the only laptops to be used by NASA in space. Lenovo’s ThinkPads have met a barrage of military specifications tests, which were passed with flying colours. These tests are testament to Lenovo’s commitment to quality and reliability. It has been described as the “real co-pilot” by Pasquale Scaturro, a geophysicist, explorer and expedition leader who travels frequently to places with drastic weather conditions. According to Scaturro, “It has withstood every imaginable environment on Earth and is still performing without missing a beat.”

– Lenovo also provided over 50 desktops, laptops and workstations to the Centre for Severe Weather Research (CSWR), to aid these “storm chasers” in crunching, tabulating, and organizing the gigabytes of data collected from each storm. Some of these products are outfitted in mobile Dopplers on Wheels (DOW), where mobile RADAR vehicles will image the storms with more accuracy and detail than is possible with fixed RADAR installations. It is also worth noting that these were not specially customised for CSWR, and were deployed right out of the box.

3. I read that Lenovo has done some market research prior to the launch of the campaign. What were some of its findings, especially for the targeted youth market?

Being acknowledged as a brand that is relevant to consumers is crucial for any technology product, and to build a consumer brand it’s important to be relevant to the youth market. To this end, Lenovo conducted the following research to better understand our key demographics, of which youth are an important segment:

What emerged is that youths see technology as an integral part of themselves and their lives. And many of them see technology as a tool that helps them achieve something rather than a badge to some cool club. The keywords that emerged consistently across the research include: walk the walk, want it now, doing, make it better, commit, integrity, ambition, obsession, imagination, ingenuity, positivity, optimism, purpose.

4. Isn’t the “For Those Who Do” campaign very similar sounding to Nike’s “Just Do It” several generations ago? How does a propensity for action translate into actual product features or benefits?

The difference between campaign messages and slogans ultimately boils down to authenticity and distinction. We believe “For Those Who Do” is an authentic and distinct position for Lenovo because it specifically defines who we are as a company. This idea is the essence of what personal technology should be: Tools that ignite human accomplishment. Not just potential, but real action and tangible achievement.

Lenovo at its core is a company focused on action. Our global culture, called “The Lenovo Way”, is predicated on the fact that Lenovo employees do what we say (delivery), and own what we do (accountability). Lenovo is a company powered by innovators and inventors who are obsessed with making Do machines – rock-solid, highly functional tools that ignite human accomplishment.

Lenovo’s products appeal to the people who get out there and make things happen – people with the Do mindset. For these people, technology is not a badge to some cool club but a tool to help them achieve their goals.

5. What is Lenovo’s market share in the world and in Asia? What about Singapore? How many units of computers does it move each year?

Lenovo has been achieving stellar growth — outperforming the worldwide PC industry for eight quarters and rose to become the world’s third-largest PC vendor with 12% market share (according to preliminary second quarter 2011 data released by research firm IDC). With record revenue of over US$21 billion, Lenovo recently returned to the Fortune Global 500 list, ranked at a record high number 450.

In the Emerging Markets, Lenovo achieved a #1 position with a record year-ending markets share of 10.2%. Lenovo’s PC shipments grew 31.5% year-over-year during the fourth fiscal quarter, more than twice as fast as the industry growth rate in the emerging markets. ASEAN was one of the strongest performers for Lenovo in the region, with a 43% increase in PC sales in the fourth fiscal quarter.

6. Highlight the key driving factors underpinning the “For Those Who Do” campaign.

Lenovo’s brand campaign builds upon the company’s position as the world’s third largest PC company, and the fastest growing PC company in the industry for eight quarters in a row. Although very well-known in China, we believe that this new brand campaign will help carry Lenovo’s story as a global technology leader to a worldwide audience.

This campaign also aims to strengthen Lenovo’s brand perception as it expands beyond its PC leadership to roll out its range of tablets, smartphones, smart TV and digital home products. Being acknowledged as a brand that is relevant to consumers is crucial for any technology product, and one of the key ways to build a consumer brand is to be relevant to the youth market. In that regard, Lenovo is placing particular emphasis on building brand consideration and preference with the younger generation of decision-makers (18-24 year olds).

7. Is there anything new or special about the campaign which other PC makers haven’t pursued yet?

Our ad campaign communicates the essence of what personal technology should be, and depict a mix of aspirational and realistic scenarios of how ordinary people do extraordinary things. The tone of our ads will convey the Do spirit of Lenovo, our products, and our audiences – optimistic, authentic, deliberate, into it, and understatedly cool.

For example, we have a female DJ in Singapore who uses a Lenovo ThinkPad as her tool to spin music at clubs. We are also sponsoring the annual Girl DJ Bootcamp this year, where the 12 aspiring DJs will each receive a Lenovo laptop to experiment and practice during the bootcamp.

In Latin America, we are producing a five-part web series, titled “Los Doers”, which will showcase four “DO-ers” across Latin America. These “DO-ers” will be selected through a series of challenges, and will be the first ever interactive web reality show to be transmitted only through social media channels.

8. Finally, how does Lenovo hope to break the Apple juggernaut?

This is a big market and there is room for different players. At Lenovo, we have continually focused on differentiation through innovation and on building great machines for the Do-ers of this world.

We have also executed consistently and successfully against our “Protect and Attack” strategy, and our performance validates this. Lenovo has outperformed the worldwide PC industry for eight quarters in a row, and has grown faster than the top PC makers for six quarters in a row. As a result, Lenovo has taken market share and moved up in rankings to become the 3rd largest PC vendor in the world. 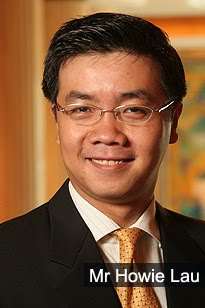 Founder of Cooler Insights, I am a geek marketer with almost 24 years of senior management experience in marketing, public relations and strategic planning. Since becoming an entrepreneur 5 years ago, my team and I have helped 58 companies and over 2,200 trainees in digital marketing, focusing on content, social media and brand storytelling.
McDonald’s Reveals Its Restaurant Secrets
The Truth About Ikea: Insights from an Insider