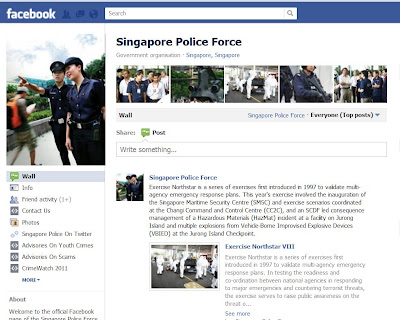 Congratulations to our boys and girls in blue for making the first Facebook arrest!

According to the Singapore Police Force’s (SPF) media release, this development came on 11 Nov 2011 (an auspicious 11/11/11!) when a “public-spirited person called 999 and informed that he could identify a loanshark suspect from a photo posted on the Police Facebook Page since July 2009. The action led to the arrest of two 19 year old suspects for involvement in loanshark harassment activities in the Bukit Merah area.
Established since 2009, SPF’s Facebook Page has garnered almost 190,000 “Likes”. The page has helped to raise awareness not only of ongoing criminal cases but enhanced public education on law and safety. Apparently, this has worked as a complementary channel to traditional media in soliciting clues and appeals for help from the population.

While SPF’s arrest of “crowdsleuthing” is the first such case in Singapore, the impact of social media and mobile channels in crime solving has been quite significant all over the world. Here are some more recent examples:

– In the US, the Federal Bureau of Investigation (FBI) has used its Facebook Page to garner clues which resulted in recovering the body of a missing 34 year old mother Melissa Ann Best in Illinois. The tips from Facebook helped police to locate the lost van in which her body was found.

– Facebook and Twitter has helped to increase tips to the Missoula County Sheriff’s Department in Montana, USA by more than 50%. This is remarkable even with just a modest 585 “Likes” on the Sheriff’s Facebook page.

– Closer to home in China, police has used their equivalent of Facebook called Sina Weibo (新浪微博) to crack a kidnapping ring involving 15 children from Zunyi, Guizhou, who were sold them to places in Henan, Shaanxi, and Hebei. Over 1,500 tips and clues were submitted to their social network page for the case.

While the home security authorities in these countries and municipalities have embraced social media in the fight against crime, citizens have also embraced social tools to empower themselves.

An example of such a network is Crimestoppers International, a globally based platform which sprung from the UK which has made waves in highlighting prominent cases. In a similar fashion, citizens in the US have also organised themselves to fight crime using social media through online initiatives like Crimeseen.

Both platforms allow reports and tip offs to be made through confidential channels (phone or email), allowing informants to remain anonymous while ensuring that some degree of verification is made (to prevent bogus reports).

Over in Latin America, crime maps have also been used to chart the occurrence of crimes in different regions.  Examples include WikiCrimes in Brazil and Victeams in Venezuela. These are useful in helping police departments to zoom in on “problem” areas and study trends.

As the war against crime hots up – many of which are ironically committed through social media and mobile channels themselves – it makes sense for security forces to engage citizens online. The increasing ubiquity of smartphones and “always-on” connectivity of social networks make it increasingly easy for citizens to play their part in making the world a safer place to live in. Conversely security forces could increasingly tap on the collective observation powers and “social antennae” of the public in sussing out clues, tip offs and suspects.

The next time you see your local police officer “just surfing the web”, he or she may actually be investigating a case as opposed to just goofing off!

Founder of Cooler Insights, I am a geek marketer with almost 24 years of senior management experience in marketing, public relations and strategic planning. Since becoming an entrepreneur 5 years ago, my team and I have helped 58 companies and over 2,200 trainees in digital marketing, focusing on content, social media and brand storytelling.
Conversational Capital: The Secret to Buzz-worthy Products
Imagine Wearing Your Customer’s Shoes