The first thing which greeted my eyes were these Coke-designed aprons for wanna-be bartenders aka party goers. A display of different types of Coke – regular, Coke Light and Coke Zero – as well as T-shirt designs from Uniqlo adorned the restaurant. Lucky guests brought home 10 of these exclusively designed Tees by answering some rather simple questions. 🙂 In case you do not know, Coke can be used for cooking! Two dishes were given the unique caramel beverage treatment – baby back ribs and chicken wings. The verdict? Well, I kind of liked the baby back ribs although the Coca-Cola taste wasn’t that strong in that recipe. After dinner, Coke’s June Kong-Dhanabalan addressed the crowd of Coca-Cola collectors, bloggers, and other friends. Next, Tiffany brought us through a brief history of Coca-Cola, regaling us with some interesting facts on the brand such as the one above.

I strongly encourage you to watch the above video on Coca-Cola’s Overseas Filipino Workers project. It was a heart-warming gesture by Coke to provide some happiness to these workers who have sacrificed much for their families. As highlighted earlier, Coca-Cola is rolling out 10 Coke inspired UNIQLO T-shirts. Look out for them in the stores soon!

The Coca-Cola Hug Machine project at the National University of Singapore (video above) created a huge media phenomenon which brought global attention to my alma mater. As if tying up with UNIQLO isn’t enough, Coke has also worked with leading designers such as Karl Lagerfeld, Donna Karan, and Jon Paul Gaultier to create designer Coke bottles and apparels. Next on the agenda were Coke beverage inspired cocktails. Here, our bartending instructor educates us on the various tricks of the bartending trade. An instruction manual/recipe sheet is at hand to guide us how to mix those cocktails, using Minute Maid Pulpy juices, Heaven and Earth Green Tea and Coca-Cola drinks as mixers. Keropok Man and Alvin concentrated hard to create the first cocktail with Heaven and Earth green tea and Peach Liquer. A Coke collector adding ice to his newly concocted beverage. Apparently, these ice cubes are “holey” so that they can chill the drinks more quickly and be more easily crushed by the bartenders. Our first creation of a Heaven and Earth Green Tea cocktail. The verdict? Well, it does taste OK although I wouldn’t be ordering this regularly in the clubs. Of course, some of us enjoyed the session more than others, as you can see from Yong Wei’s big grin while mixing the ice. The final event for the evening was a fiery showcase by our bartending instructor. He will set a potent 70% alcoholic rum mixture ablaze, and June was supposed to drink that flaming mixture! See, its really burning brightly blue! Fortunately, June did not burn herself with the risky act. Phew! 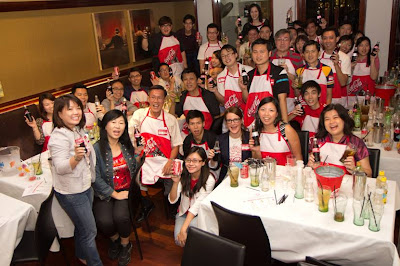 A farewell family photo with everybody holding a bottle or can of Coke and other beverages. Happy 126th Birthday Coca-Cola! Finally, I brought home a goodie bag with mixers and equipment to make my own cocktails, complete with the apron which I wore. Well, maybe an occasional tipple should be fine. 🙂

Founder of Cooler Insights, I am a geek marketer with almost 24 years of senior management experience in marketing, public relations and strategic planning. Since becoming an entrepreneur 5 years ago, my team and I have helped 58 companies and over 2,200 trainees in digital marketing, focusing on content, social media and brand storytelling.
The Psychology of Social Commerce
Voyaging On Asia’s Largest Cruise Ship