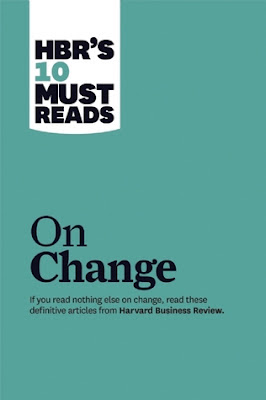 Harvard Business Review or HBR has always been one of the mainstays of my reading list. I love how its editors seive out business and leadership articles which are meaty enough to provide a good intellectual workout without unnecessary academese.

Its latest compilation “HBR’s 10 Must Reads” is a selection of carefully selected journal articles centred on the most pressing issues of management.
“HBR’s 10 Must Reads On Change” features articles by luminaries such as John Kotter (Leading Change), Thomas A. Stewart, W. Chan Kim and Renee A. Bauborgne (Blue Ocean Strategy) and others. Spanning topics such as human resource management, leadership, culture and psychology, the anthology cover the breadth and depth of key considerations in transforming any organisation.

Let me cover very briefly some of the major themes.

Leading change: Why Transformation Effort Fail by Kotter details his famous 8 steps to transformation. It explains that transformation is a process and not an event, and may take years to achieve. The step-wise approach to change is also proposed by David A. Garvin and Michael A. Roberto in Change Through Persuasion, with these four stages: Set the Stage for Acceptance; Frame the Turnaround Plan; Manage the Mood; and Prevent Backsliding.

In Radical Change, The Quiet Way, one is taught by Debra E. Meyerson how to effectively implement change as a “tempered radical” through strategies such as:

Leadership is further elaborated in an article on former NYPD Police Chief Bill Bratton by Chan Kim and Mauborgne (Tipping Point Leadership), as well as a A Survival Guide for Leaders by Ronald A. Heifetz and Marty Linsky. The former entailed breaking through the cognitive, resource, motivational and political hurdles of an organisation (with reference to the Strategy Canvas), while the latter implored us to manage our environment and ourselves in any transitional role.

The psychology of change is tackled in several articles: The Real Reason People Won’t Change (Robert Kegan and Lisa Laskow Lahey) and Why Change Programs Don’t Produce Change (Michael Beer, Russell A. Eisenstate, and Bert Spector). In the first, we’re taught to diagnose change opponent’s competing commitments and big assumptions (ie why their behaviours do not seem to match what they say they want). The second taught us that enduring change only happens when there is alignment with real work – sending woolly imperial edicts from HQ alone isn’t going to help!

My favourite article (if that is at all possible) is probably The Hard Side of Change Management by Harold L. Sirkin, Perry Keenan and Alan Jackson. Based on a comprehensive study by the Boston Consulting Group, it proposes the DICE framework for change:

1) Duration – Projects frequently reviewed stand a better change of success than infrequent ones;

3) Commitment – Leaders must visibly endorse the change initiative and communicate constantly to affected employees in a consistent and clear manner;

4) Effort – Do not over tax employees with too much additional work as that will result in resistance. Ensure that workload does not increase beyond 10%.

Change management is one of the toughest jobs in the business world. You need to carefully frame the context for change, build an “A-team”, manage the process carefully and overcome numerous obstacles along the way. By learning from some of the best minds as detailed in “On Change”, one is hopefully better prepared for the arduous journey ahead.

Founder of Cooler Insights, I am a geek marketer with almost 24 years of senior management experience in marketing, public relations and strategic planning. Since becoming an entrepreneur 5 years ago, my team and I have helped 58 companies and over 2,200 trainees in digital marketing, focusing on content, social media and brand storytelling.
Public Relations Strategies for Non-Profits
Content Marketing Strategies for B2B