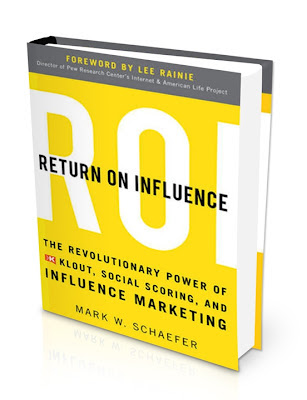 So begins Return on Influence – The Revolutionary Power of Klout, Social Scoring, and Influence Marketing, a slim volume delving into the world of social scoring. Written by marketing consultant Mark Schaefer, the book traces the origins of “citizen influence” on the social web, delves deeply into the world of Klout, and provides tips on how one can navigate this new digital landscape.

Increasingly, influencers matter more and more in the world of marketing. Luminaries like Robert Scoble (author of Naked Conversations and godfather of blogging) have caused spikes in web traffic through highlighting particular products.

Widespread global availability of free or low-cost web access, easy-to-use social tools, and algorithms by companies like Klout and PeerIndex have also resulted in an “influence revolution”.

According to Schaefer, the rules of online influence are affected by several factors:

1) Authority – Individuals with greater access to information and power, and their ability to move content through the social networks.

2) Consistency and Commitment – A virtue associated with superior intellectual strength, logic, rationality, and honesty, which elicits trust amongst followers.

4) Scarcity – The fact that an item which is “rare, banned, discontinued, sold out, or unavailable” make us want it more. Having a unique and irreplaceable niche helps.

5) Social Proof – This is a major factor on the web, and is predicated on “badges” such as one’s number of followers, Klout scores, web hits and other indicators of social leadership.

6) Reciprocity – An age old principle on social media, where giving small (or large) favours help one to build up social capital and goodwill.

7) Content – Arriving in forms such as text, videos, presentations, images, audio, and micro-content (Facebook status updates, tweets, etc), content is a key driver of online influence. A power tip here is the creation of content that is RITE: Relevant, Interesting, Timely and Entertaining.

In the section on Klout, we learned how Joe Fernandez worked with developers in Singapore (yes I didn’t know that!) to develop an algorithm for social scoring that is fast gaining credence. While marrying targeted influencers with product brands seems like one made in heaven, Klout isn’t empty of controversies. These include the fact that it can be “gamed” by hackers, spammers and bots, fall prey to cheating by bogus account holders, and does not reflect offline influence.

Through the Klout Perks programme, companies such as Audi, Universal Pictures, Nike, Disney and other big brands have organised successful campaigns targeting powerful influencers in niche areas. They include introducing new products, including social proof in traditional marketing campaigns, building advocates outside one’s traditional fan base (eg a high-tech car like Audi A8 and technology influencers), fundraising for nonprofits, coupons for high score influencers, prioritising customer service responses and more.

For companies to milk this, best practices include the following:

Perhaps most importantly for citizen influencers like myself, Schaefer offered three steps to improving one’s Klout score. While the “secret formula” of Klout’s algorithm is unknown to all, one should look at:

3) Systematically engaging influencers who are most willing (or least passive) to distribute your contents virally.

The concluding chapters of the book highlights the future applications of social scoring. Some of these ideas are rather scary, for example calculating a return on influence for every individual, adding a digital layer of Klout scores via augmented reality apps on smartphones, and having a score for every employee in a company.

Ending on a philosophical note about the good and evil of social scoring, Return on Influence provides a good understanding of the new world of influence marketing and its implications. Speaking to a friend on Klout, I discover that the need to opt-in here in Singapore somewhat limits its application for marketers.

Despite this, I believe that the world of influence marketing is going to grow. To prepare ourselves, marketers and citizen influencers alike should understand the dynamics of this “new normal” in our work and everyday lives.

Founder of Cooler Insights, I am a geek marketer with almost 24 years of senior management experience in marketing, public relations and strategic planning. Since becoming an entrepreneur 5 years ago, my team and I have helped 58 companies and over 2,200 trainees in digital marketing, focusing on content, social media and brand storytelling.
9 Elements of Japanese Aesthetics
Aristotle’s Secret to Great Content