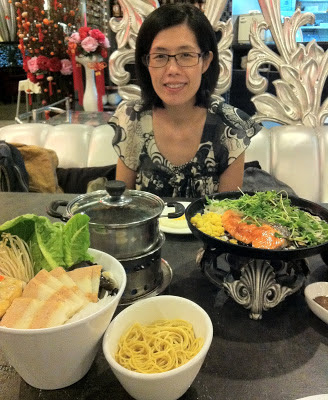 What are Johor Bahru’s (JB) malls like? Do they really offer great value for shoppers?

Recently, my wife and I decided to revisit JB’s shopping malls after hearing positive things (mainly how cheap it was to buy books from Popular) about our closest neighbouring city from friends. As we’re pretty time-starved, we chose to focus on two malls – City Square and KSL City.
Rather than drive in, we decided to take the Singapore-Johor Express buses from Queen Street to JB. We also chose to visit on a weekday (I took leave) to beat the Causeway jam.

Upon reaching JB, we first proceeded to City Square which is adjoining the JB Customs Immigration Quarantine (CIQ) complex. 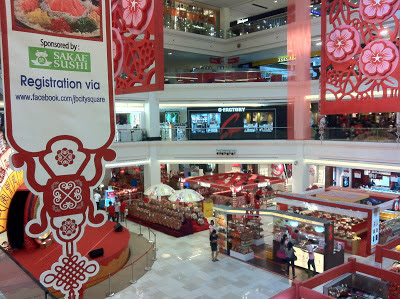 With a majority stake by Singapore’s GIC, City Square is heavily populated by many Singaporean brands like Sakae Sushi. The mall was dolled up for the upcoming Chinese New Year (CNY) celebrations and evergreen CNY songs were being played throughout the day. As its a Friday, the place was pretty quiet during the day, with moderate crowds (mainly Singaporeans) streaming in towards the evening. 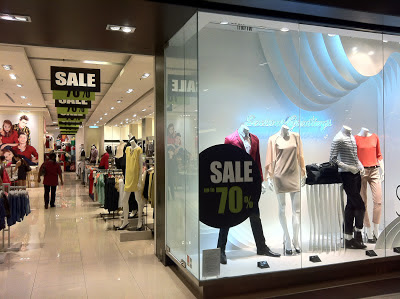 We shopped for new clothes for CNY (yes, we’re quite last minute!) at local outlets like Padini and Xenus Men Fashion. Generally, sales assistants were helpful, attentive, and obliging to our requests. I noticed that they weren’t chatting incessantly with each other even though there weren’t many people, nor were they peering at their mobiles all the time. 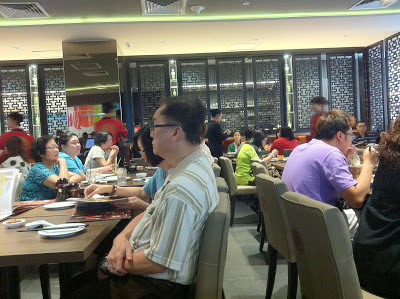 For lunch, my wife suggested that we patronise the Dragon-i restaurant at City Square. The crowd was pretty decent, and one could tell that many were Singaporeans from their accents. 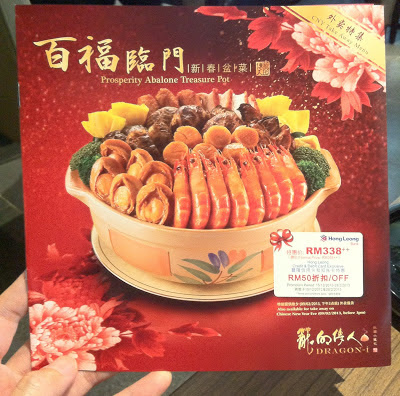 Like Chinese restaurants in Singapore, the highly popular Treasure Pot or Pen Cai was being offered to usher in the festive season. I noticed that the restaurant chain tied up with an Iron Chef from Hong Kong to bolster their reputation as a premier purveyor of Chinese cuisine. 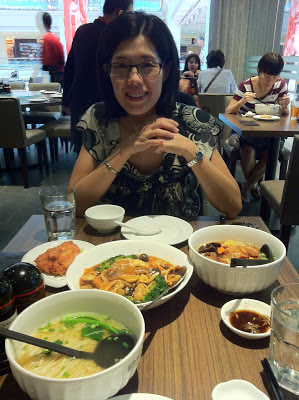 We enjoyed our lunch of la mian, xiao long bao, and beancurd cooked with vegetables at Dragon-i and spent about RM 80.95 (S$33.75) in total. The waiters and waitresses were alert and attentive to our needs, and the food came quickly. At this point, we noticed that they were all locals and mostly young. 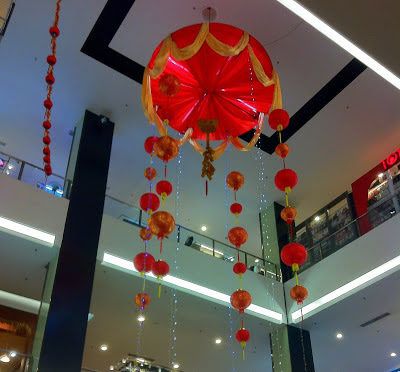 We next took a cab (costing about RM 8) to nearby KSL City mall. This newer establishment was recently opened, and boasted of anchor tenant Tesco – a popular haunt for Singaporeans stocking up on cheap groceries and sundry goods. Unlike malls in Singapore, its decor for CNY was far simpler as you can see above. 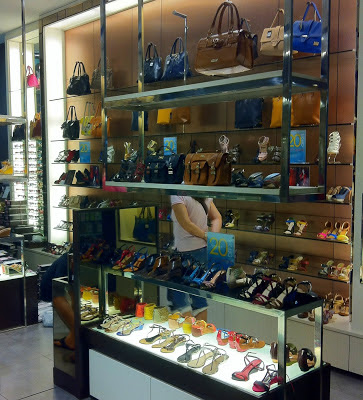 We shopped for bags, shoes and clothes at the mall. Generally speaking, most of the fashion outlets seemed stuck in the past relative to our Orchard Road outlets. While there are a few outlets offering hip and trendy apparels influenced by K-Pop, these are few and far between. It took us quite a fair amount of digging to uncover “gems”. 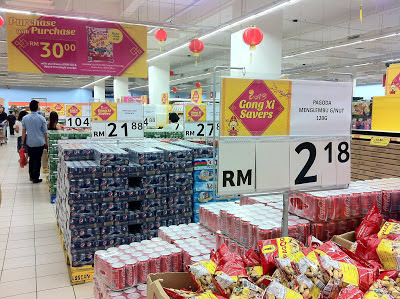 At Tesco, most food and sundry items were considerably cheaper than equivalent ones in Singapore. Some were about half price (or even less), largely due to our strong currency exchange rate. This is one of the main reason why so many Singaporeans drive to JB to load up. Again, most of the cashiers were young. 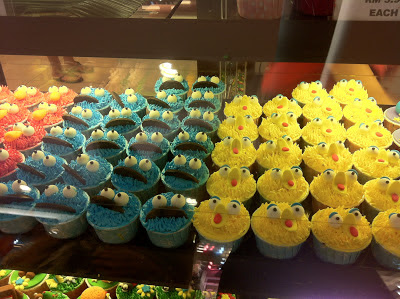 I couldn’t help noticing these cute cupcakes shaped like Sesame Street characters. They were going for about RM 3 each (S$1.25). 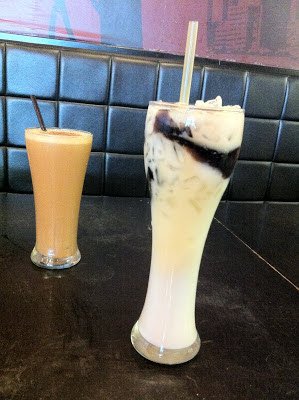 To replenish our energies, we had two cold drinks during tea – a special fragrant ying yong (tea-coffee mixed) and almond with grass jelly at the Causeway Bay Hong Kong Cafe. The bill was about RM 12.75 (S$5.30) in total. 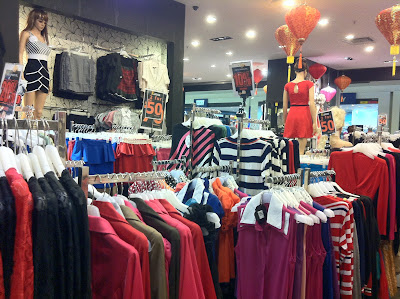 Tina had a very positive experience at E-Zone – a smallish boutique at KSL.

After putting on various sizes of a nice oriental dress, she fretted between two different sizes. The retail assistant, a very young Malay boy, offered to take down the display piece on a store mannequin so that she could try it on for size.  He was very patient and never once showed any signs of irritation (in fact, this was a common observation at all the boutiques we visited).

Tina later told me that back home in Singapore, the sales assistant at a fashion store remarked that it was not convenient for her to try out a display piece when she requested so. It was quite such a stark contrast from her experience here. 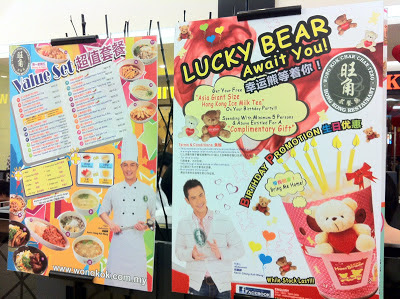 Here’s a poster of a menu and a promotion at another Cha Chan Teng at KSL. We saw many students in their uniforms sharing a huge jug of iced milk tea and enjoying themselves here, taking advantage of a student discount. It was clear who their primary target audiences were. 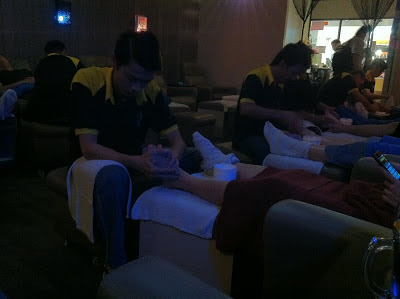 We next indulged in a foot massage at a reflexology centre downstairs. The masseurs were professional and skilled at their craft, and we felt totally relaxed and refreshed. It costs us about RM 40 (S$16.60) per person for an hour’s worth of pampering. 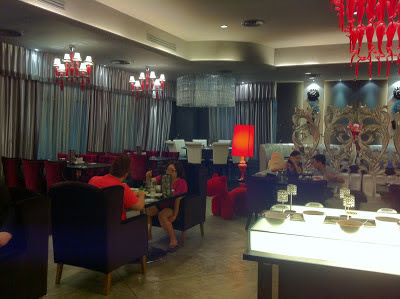 Dinner was at Arashi Shabu Shabu, a beautifully designed steamboat and barbecue restaurant with plush velvet chairs, hanging chandeliers, and a comfortable ambience. Like the earlier restaurant we visited, service was brisk and efficient, handled by a very young team of waiters and waitresses. 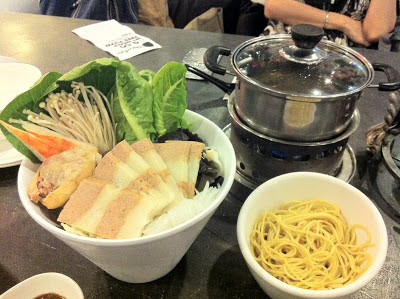 It was quite a pleasant surprise to see that the restaurant offered many vegetarian options. I decided to try this vegetarian belly shabu shabu (RM 24.90 or S$10.40) which came in a herbal broth with pumpkin noodles. The meal was quite substantial and the broth flavourful even though it didn’t have any meat in it. 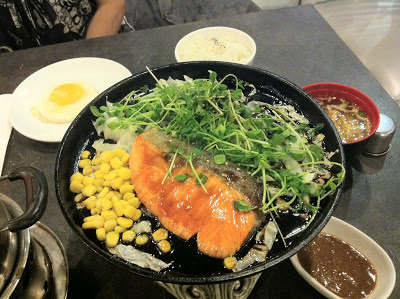 Tina had this Salmon Teppanyaki set which costs RM 25.90 (S$10.80) which was pretty yummy. While we were eating, waiters came by to top up our broth or extinguish the flame automatically at the appropriate juncture. Requests for additional bowls were also catered for promptly. At the end of the meal, we were asked to provide our feedback via this form. Considering the price of the meal, the ambience of the restaurant, and the quality of the food, our experience was “excellent” across most categories. 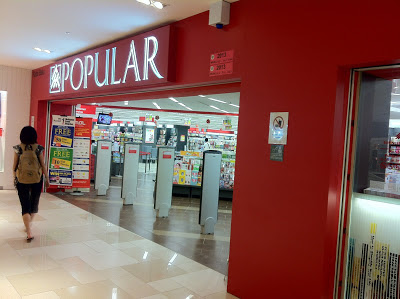 After dinner, we returned to City Square via a more luxurious blue taxi which cost RM 13 (S$5.40). Our final destination was the Popular Book Shop where certain books and stationery items could be bought at lower prices. We also bought some Hokkaido swiss rolls (milk and strawberry flavours) home to fill our bellies over the next two weeks or so. 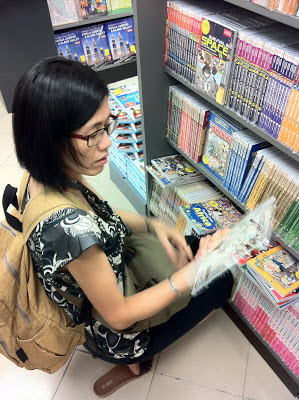 At Popular, our main objective was to buy these “Adventures in Science” comic books from Korea. Ethan is a huge fan of the series and we thought that it was a fun way for him to pick up scientific concepts. 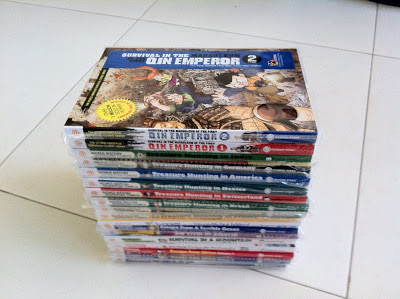 Our final haul for the night was this stack of 18 educational comics which costs RM 170.10 (S$70.90) after 10% discount for Popular card holders (yes it works here too!). That’s about S$3.95 for each comic which is less than half its price in Singapore.

As you can see, we did enjoy ourselves at the two malls in JB. While they weren’t as hip or trendy as those here, prices were attractive and service attentive. The sparser crowds in JB malls made shopping and dining more pleasant – even on a Friday night.

On the issue of safety, I feel that common sense needs to prevail here. Stay in well lit places, dress casually and conservatively (as opposed to dripping with diamonds), and avoid sleazy places at night. Throughout our visit, we didn’t feel threatened at any time. Moreover, most malls have armed security guards watching over them.

Founder of Cooler Insights, I am a geek marketer with almost 24 years of senior management experience in marketing, public relations and strategic planning. Since becoming an entrepreneur 5 years ago, my team and I have helped 58 companies and over 2,200 trainees in digital marketing, focusing on content, social media and brand storytelling.
Transforming the Movies in Your Life
Which Comes First – the Product or the Market?