Can You Spell “Supercalifragilisticexpialidocious”? 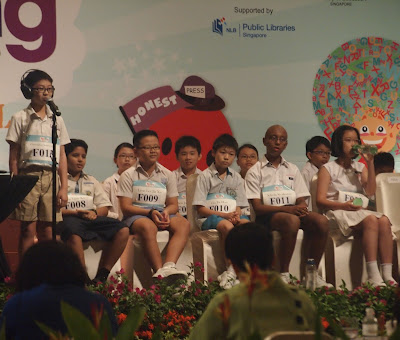 Well, perhaps these kids can. Especially on a good day?

Thanks to an invitation from Omy.sg, I had the chance to attend the grand finals of the RHB-The Straits Times National Spelling Championship 2013. Running for its second year, this competition for kids aims to raise their appreciation of spelling in language and literacy in a fun and competitive manner.  Targeting students in Singapore, it challenges them to out-spell each other through the awareness of phonemes and syllabication while enriching their vocabulary through the study of prefixes, suffixes and root words.
Open to Primary 4, 5 and 6 pupils, this year’s event (aka The Big Spell) drew a record 1,400 students in the preliminary round in March this year. After several hard fought spelling skirmishes (the peaceful kind) lasting several weeks – the Preliminary on 9 March and Zonals on 13 April – the field was whittled down to just 31 finalists.

The eventual winner of the final spelling battle was 12 year old Ashvin Sivakumar. This tall Primary 6 pupil of Anglo-Chinese School (Primary) was clear and confident throughout the 10 rounds of the final competition.

With much aplomb, Ashvin calmly spelled his way to the top spot after getting the word “pulchritudinous” (see meaning here) in the 10th round. His wizardy of words helped him to knock out first runner-up Kua Le Yi, 10, from Catholic High School (Primary) and second runner-up Loi Si Xian, 11, from Raffles Girls’ Primary School. Ashvin takes home $5,000 and the Challenge Trophy for his school, while the other two top spellers won $3,000 and $1,000 respectively. Ashvin showing how these champion students cast their spells

Co-organised by RHB Banking Group and The Straits Times, in partnership with the Ministry of Education, this second edition of The Big Spell was backed by iQ-hub with the support of the National Library Board. If you’re keen to be a champion speller (like these kids), do check out iQ-Hub’s iSpell program to learn, practice and have fun all at the same time.

Join me now as I take you on a “spellbinding” journey through the morning’s event. As the nation’s leading English newspaper, it was clear that The Straits Times seeks to raise the literacy of all Singaporeans. These mascots helped to enliven the tense and competitive atmosphere that morning. See if you can guess who they are. Students chatting excitedly while supporting their friends on stage. RHB’s mascot posing with future (or current?) clients of theirs. I’m sure these kids are savers! What are these parents and students getting all excited about? Well, they are supporting these kids focusing hard on a special “iPad” spelling round. Yes, parents, there is virtue in letting your kids play the right kind of games. Mr Warren Fernandez, Editor of The Straits Times, addressing the crowd of pupils, parents, teachers and other well wishers, urged kids to “pay attention to English words, appreciate their texture, structure and idiosyncrasies”. Chairman of RHB Banking Group, Tan Sri Azlan Zainol, hopes that RHB’s support will help to “build an informed generation of confident, competitive and motivated individuals who will eventually become successful in their own right”. For the final round, each finalist had to spell aloud words read out by a pronouncer (none other than theatre celebrity Nora Samosir). They could clarify the word further by asking for the language of origin, different forms of pronunciation, and root word. However, they cannot poll the audience, call a friend, or choose 50-50… Finalists of The Big Spell getting ready for the challenge. The chilly air con in the room didn’t really help I suppose. Spelling is done not just with the word but the hands as well! If you get the answer right, you’re rewarded with a smiley green lollipop. If, however, you spell the word wrongly, an unhappy red lollipop appears. Parents, teachers and other adults supporting their kids on stage. I noticed that none of them were attempting the spelling contests themselves. I guess it could be quite stressful to try to spell words like “perspicacious”, “prognosticate”, and “graphophobia”… … On the contrary, these kids from Rosyth Primary School were each attempting it while their compatriots on stage were going through the rounds too.

Founder of Cooler Insights, I am a geek marketer with almost 24 years of senior management experience in marketing, public relations and strategic planning. Since becoming an entrepreneur 5 years ago, my team and I have helped 58 companies and over 2,200 trainees in digital marketing, focusing on content, social media and brand storytelling.
Epic Marketing
Secrets of Giant Pumpkin Farmers