Addressing the Absence of Attention 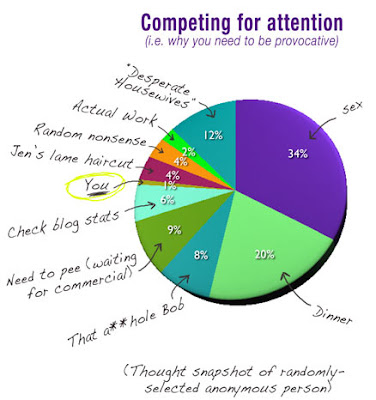 I love this pie chart! (Courtesy of Creating Passionate Users)

One of the most prominent phenomena in this present age is its move towards slicing and dicing everything down to its simplest and most fundamental parts. This relish for reductionism has resulted in an ever increasing number of people who acquires information in a vast number of areas without ever dipping below the surface.

The latest I read was that mini-MBAs are now growing in popularity. Who has time to spend 1 or 2 years of their lives pursuing a fast ubiquitous qualification these days – other than the few oddballs like me?
?

This atomisation of attention has also seen the growing popularity of social tools which are increasingly productive in reaching the greatest number of people with the least amount of effort. Just look at how increasingly efficient social networking tools like Twitter, Plurk and Facebook are displacing older and less efficient ones like forums, blogs and mailing lists.

With Facebook’s new interface – which I personally love although I know many hate – you can immediately sense what your friends are doing and respond or interact almost immediately. Twitter’s power lies in how it can disseminate in real time the shortest amount of information which can still be coherent.

The shorter attention spans of practically anybody who is plugged into the digital and mobile world has resulted in a few trends.

First, people are spending less time creating their own original content, and more time repackaging (retweeting, sharing) other people’s content, occasionally peppered with their own observations. This applies equally to both thought leading white papers and the latest celebrity gossips.

Second, people are now attracted to sensational headlines more than ever before, judging the worth of a tweet, blog post, or Youtube video’s content before even laying eyes on the actual stuff. In other words, they are judging a book by its cover, and unabashedly so!

Third, people are having difficulty focusing on any endeavour which requires one to still one’s heart and to concentrate. Anything that requires them to read, listen or view for 10 minutes or longer will result in a quickening of heartbeats, nervous shifting of the eyes or twiddling of blackberries.

Fourth, people are becoming less forgiving of badly produced content, awkwardly constructed conversations, or abysmal and illogical prose. It is no longer just love at first sight, but loathe at first sight too.

What are the implications of these trends for today’s marketer?

For a start, one has to cut to the chase quickly. People don’t have enough time to listen to a slowly unfolding tale, chapter by chapter. If you don’t hit me with the punchline within a minute or two, you would probably lose me forever.

Spread your eggs across different baskets, but make sure you know which ones hatch first! With the fragmentation of media channels, one needs to have a finger in every pie or at least a sense of what’s happening. This is where social media intelligence players like Brandtology and JamiQ come in, with their abilities to seive out web sentiments relevant to your enterprise.

The one thing which beats mass communication hands down is personal communication. Sending a nameless and faceless email, blogpost or Facebook update targeted at everybody is like firing a shotgun at lala land. What you should do instead is to write personalised emails, SMSes, or tweets targeted to the customer segment of one. A purposeful and sincere request is far more effective than one that is focused on everybody – and nobody.

One needs to make it easy for one’s customers and clients to transact or interact with you. Don’t make them fill out a 10 page form with their entire life histories, nor to register on your custom-made, proprietary, all-in-one super social software. Instead, go and suss them out in the alleys and streetways, registering them on the spot wherever opportunity arises.

Finally, the one way to grab attention by the busloads is to be remarkably interesting, creative (but not offensive) and to inspire curiosity. I love this quote cited by the Creating Passionate Users blog: “The secret is to be more provocative and interesting than anything else in their environment.” (from David Lichman).

Founder of Cooler Insights, I am a geek marketer with almost 24 years of senior management experience in marketing, public relations and strategic planning. Since becoming an entrepreneur 5 years ago, my team and I have helped 58 companies and over 2,200 trainees in digital marketing, focusing on content, social media and brand storytelling.
Skittles & Social Media – Success or Scuttle?
Clay Shirky on The Future of Organisations