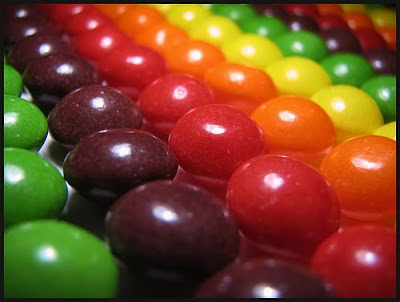 There are almost 20,000 photos tagged with “Skittles” on Flickr (courtesy of PaPeR.cLiP)

First made in 1974 as a hard shelled candy, Skittles is part of the MARS stable and is easily recognisable for their multi-coloured sugar shells with the letter “S”. The candy brand shocked and awed the world back in March this year when they transformed their corporate website into a real-time social media portal. The new website also incorporates a floating widget pulling in content and inputs from Youtube, Flickr, Wikipedia and Facebook. To get onto their home page, all content producers – photos, videos, tweets – need to do is type the word “skittles” or tag them and Voila!

Skittles was able to initially generate a huge amounts of traffic (more than 1332% in a day) by people who were simply curious to see their own “skittles”. It also generated a tremendous amount of publicity and buzz online.
Ordinarily, one would think that this was a phenomenal social media success for the artificially coloured sweet brand. Unfortunately, the efforts of the rainbow-coloured candy makers snagged some hiccups in the form of flamers who posted numerous offensive, incendiary, homophobic and racist remarks online with the “Skitters” tag. This got so bad that they have locked their account. What you now get is a cat avatar on their Twitter page.

Will Skittles succeed in the long run?

Well, it certainly managed to build a tremendous following on its Facebook fan page (with more than 3.4 million fans as of this posting), and their Twitter feeds are still trending. As of now, their website still links to their various online and social media properties (their “home page” is now a Facebook page, which is “safer” than Twitter). I also see lots of fan-made photographs on their Flickr page, which is a good way to generate online communities.

Skittles has also left an indelible mark in the social media landscape, as the candy brand that made a difference. It defied conventional wisdom, made a candy brand a buzz topic (both good and bad), and is the first major consumer brand that has embraced social media in such a huge way.

Naturally, there are sceptics about whether their endeavours can lead to long-term success in sales. For a start, social media users on Tweeter do not necessarily belong to their principal target age group of 18 and below (although others have responded that it may be a strategy to reach a more mature market). The candy maker has also been lambasted for creating a website with poor user experience. Others feel that there is only this much you can talk about candy, and that Skittles isn’t really interacting with its users or participating in the conversation.

Personally, I am not sure if reading about people’s experience with Skitter or glancing at their tweets will necessarily encourage me to reach for that bag. After all, one doesn’t date a bag of candies (or cookies). However, what the brand has successfully done is to get their name into a huge base of social media users. This has its merits. As one blogger has put it, “Buying a piece of candy is an impulsive thing. You’re not buying a car or a house or something that you will need a lot of information on about the product and the price.”

By gaining mindshare, heartshare, and top-of-mind-recall, Skittles has improved their brand recognition without incurring significant expenditures in advertising. The answer now is whether this will lead to long-term sales and profits for the brand.

Founder of Cooler Insights, I am a geek marketer with almost 24 years of senior management experience in marketing, public relations and strategic planning. Since becoming an entrepreneur 5 years ago, my team and I have helped 58 companies and over 2,200 trainees in digital marketing, focusing on content, social media and brand storytelling.
Sandy Beaches, Windy Cliffs and Artistic Rocks
Addressing the Absence of Attention