>
Courtesy of The British Monarchy

Resplendent with superlatively extravagant pomp and pageantry, the estimated US$34 million dollar royal nuptials have resulted in many revenue opportunities for large and small businesses alike. To give you an idea, here are some of the selected costs in the entire inventory of royal wedding paraphernalia (courtesy of CBS money watch): Not just any ordinary wedding cake (Courtesy of The British Monarchy)

While the above figures are impressive to note, one should also consider the other economic spin-offs that can possibly be accrued from this Royal Bash (again from CBS money watch), thanks to the British Royal Family: Naturally, a big part of the Royal Wedding’s influence is felt through its massive interest on viewers, listeners and surfers around the world. A staggering 8,500 journalists and reporters are estimated to be in UK during the event, reporting back to their home countries on the purple-hued proceedings. With many countries around the world streaming the proceedings live, they have estimated that a global audience of 2 billion would watch this on TV.

Will and Kate’s bridal bash is also creating huge waves online, with some purporting that it will beat online streaming records, especially with its Youtube live streaming video aiming to hit 400 million viewers (which is far more than Obama’s peak online viewership of 70 million) .

Beyond live streaming on Youtube, the Royal Wedding (or rather UK’s Royal Family) also has its own Twitter account (with hashtag #rw2011), Facebook page, photos on Flickr. The enchanting engagement and wedding has also sparked off hundreds of fan sites, accounts, and networks. Collectively, it has generated a significant buzz online as seen in this infographic from Mashable: 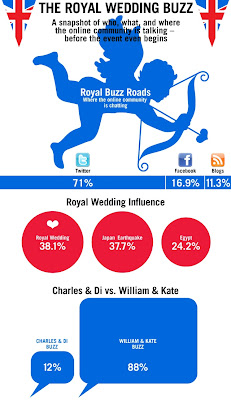 On a more sobering note, all that glamour, glitz and glitter isn’t cheap. Estimates of the total cost of the wedding – including opportunity costs incurred by giving Britain a four day weekend – run up to a princely sum from US$5 billion to US$50 billion. Whew! I suppose there isn’t a value-for-money way to spin a global fairytale that hopefully ends happily ever after.

Founder of Cooler Insights, I am a geek marketer with almost 24 years of senior management experience in marketing, public relations and strategic planning. Since becoming an entrepreneur 5 years ago, my team and I have helped 58 companies and over 2,200 trainees in digital marketing, focusing on content, social media and brand storytelling.
What do the Elections, Osama, & Will & Kate Have in Common?
Its Time to Nominate and Vote for Your Favourite Blogs