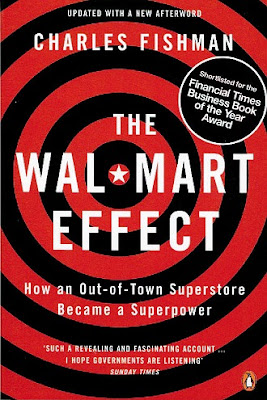 What secrets does mega-retailer Walmart hold? Is low-price retailing always good for the customer or does it exert other insidious impacts on one’s lifestyles?

The answer to those questions and more are answered in the bestselling book “The Wal-Mart Effect” authored by award winning editor of Fast Company Charles Fishman. Leaving no stone unturned, Fishman’s highly readable volume dived deeply into the massive impact exerted by Walmart, and paints a sobering and sordid picture of its true influence.

An American retail icon, Walmart is the world’s largest company by revenue (it raked in US$422 billion in 2010) and the largest private employer with some 2 million staff on its payroll. The ubiquitous buying behemoth operates 8,500 stores in 15 countries under 55 different names. Serving some 100 million customers a week (nearly a third of the entire US population), Walmart is founded in 1962 by the legendary Sam Walton who passed away in 1992.

Offering “Every Low Prices”, Walmart is discount retailing at its best. According to Fishman, the super-efficient retailer is a paragon of productivity and zero waste. With its sheer colossal size (its Supercentres can be more than 24,000 sq m in size), and extensive range of merchandise, Walmart and its affiliated stores squeeze prices as low as possible for the benefit of its shoppers.

Blazing a trail in efficiency and taking an active role in how its suppliers operate, Walmart has raised the bar not just in retailing but in distribution, logistics, manufacturing and sourcing of raw materials. In the book, this virtuous cycle has an anti-inflationary effect, helping to moderate prices of almost every product available on the shelves – from toothpaste to tyres, lawnmowers to lingerie.

The positive impact of Walmart and its virtuous beginnings is elaborated in stories like a “Wal-Mart Fairy Tale”. The chapter illustrates how the mega corporation helped “Makin Bacon” founder George Fleck’s business of bacon cooking microwaveable dish take off. In various sections of the book, Fishman also wrote about Sam Walton’s legacy and how the business grew over the years, often with the best intents in mind.

Unfortunately, Walmart’s colossal size and obsession with low prices have exerted an almost “godlike” control over its suppliers – sometimes with a death inducing vice-like grip. Citing various examples of suppliers from Salmon fisheries in Chile, sweatshop factories in Bangladesh, to the ill-fated Vlasic (maker’s of a gallon of pickles which sold for US$2.97 in Walmart stores), Fishman paints a vivid account of its seemingly disastrous impact on small town economies and jobs.

By lowering prices year after year by “pennies at a time”, The Wal-Mart Effect cited that Walmart’s business practices have resulted in American jobs being lost to cheaper manufacturers overseas. This account is most heartwrenchingly painted in a section interviewing five ladies who used to work at Nelson – a maker of lawn sprinklers compelled to ship jobs overseas in a bid to satisfy Walmart’s seemingly insatiable demand for low prices.

Apparently, Walmart’s social ills do not end there. The most staggering impact is the way it treats its country-sized workforce who are portrayed in the book as often being lowly paid (“twice the pay of minimum wage standards”), discriminated (especially women), and occasionally made to work overtime without pay. With an “austere” average take home pay of US$1,280 a month, the book described that many Walmart employees are in fact on government assistance programmes – 10,261 children enrolled in the state of Georgia’s insurance programme for poor kids had a parent who worked in Walmart.

Compellingly written with well-placed stories and statistics that hit where they hurt most, The Wal-Mart Effect is investigative journalism and anti-corporate storytelling at its best. One can’t help but feel the pain of those afflicted by the “Wal-Mart Effect” after reading the no-holds-barred accounts of companies which have shuttered their operations after going on a negative cost death spiral.

Fortunately, there is a glimmer of hope offered towards the end of the book.  It sagely advised that the company can redeem itself – and all Americans as willing consumers – by balancing a relentless drive towards low prices with responsible actions on the economy, the environment and society at large.

Will the conglomerate adhere to these words?  Only time will tell.

Founder of Cooler Insights, I am a geek marketer with almost 24 years of senior management experience in marketing, public relations and strategic planning. Since becoming an entrepreneur 5 years ago, my team and I have helped 58 companies and over 2,200 trainees in digital marketing, focusing on content, social media and brand storytelling.
Three Ways to be Truly Great
Fantabulous Fun at Phuket FantaSea